The New Year has started with a bang, with triumphs and tribulations already being felt by the finance sector. As year-end figures roll in from 2014, the sentiment is that the global economy is on the up. Deal activity for IPOs peaked towards the end of the year, helped somewhat by the landmark Alibaba listing, […] 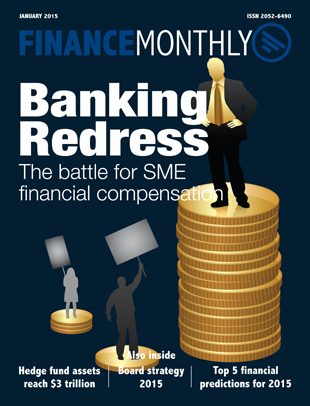 The New Year has started with a bang, with triumphs and tribulations already being felt by the finance sector.

As year-end figures roll in from 2014, the sentiment is that the global economy is on the up. Deal activity for IPOs peaked towards the end of the year, helped somewhat by the landmark Alibaba listing, making 2014 a record year for IPOs on many bourses.

In the UK, we have entered Election Year, which historically means a year of financial jitters as everyone awaits the outcome of the vote and potential policy changes. According to a recent survey by Deloitte, the General Election has been cited as the biggest challenge faced by CFOs of the UK’s largest companies as they enter 2015.

Globally, the focus is on the fall in oil prices, following Opec’s decision in November 2014 to hold production levels. Many are bemoaning this as a ‘collapse’ of immense magnitude, although I would argue that this is perhaps more of a much needed market correction?

Oil traded at an average of $30/bbl for most of the early noughties, before spiking at $140/bbl in early 2008, as the global economic crisis took hold. Since then, oil prices held steady at $100-$120/bbl until late 2014. Today, oil is back at an average of $50/bbl. What this will mean for the global economy? Analysts have many and varied opinions. Let us know your thoughts – collapse or correction – via our online poll at www.finance-monthly.com

This month’s magazine provides input on some of the other hot topics making the headlines. In our cover story, ‘Banking Redress’, Daniel Hall, CFA, Managing Director at All Square, explains why he thinks tactics from banks have no place in compensation review.

Looking ahead to what 2015 may bring, Oliver Parry, Corporate Governance Advisor at the Institute of Directors, offers his advice for board considerations for 2015, while Jeremy Mugridge, Marketing Director at Instinct Studios, presents his top five financial predictions for 2015.

Next month, the February 2015 issue will provide a round-up of the World Economic Forum Annual Meeting in Davos. If you are attending the event, let us know your thoughts. Email me on editor@finance-monthly.com

I hope you enjoy the January issue of Finance Monthly and wish you all the best for the year ahead.