Market perceptions of the adverse economic consequences of a Brexit vote in the referendum are once again manifest, with recent opinion polls and shortening bookmaker’s odds suggesting the possibility is increasing. This enhanced uncertainty is an anathema to investors, and is manifest in several dimensions. In the short-run, a declining pound and continuing concerns over […] 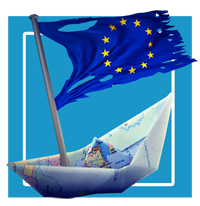 Market perceptions of the adverse economic consequences of a Brexit vote in the referendum are once again manifest, with recent opinion polls and shortening bookmaker’s odds suggesting the possibility is increasing. This enhanced uncertainty is an anathema to investors, and is manifest in several dimensions. In the short-run, a declining pound and continuing concerns over the UK’s credit rating mean the prospects  of attracting the capital inflows the UK requires to finance its unhealthy current account deficit are being seriously hampered. As recent studies by both the Bank of England and major US investment bank conclude, these developments are likely to be particularly damaging to longer term growth in a country which is currently the largest net recipient of foreign direct investment in the EU.

Brexit proponents dismiss these sentiments as spreading hysteria. However, the merits of any alternative scenario are impossible to judge, as they are completely contingent upon the terms of the resulting alliances and institutional framework the UK is able to forge subsequent to its departure.  The crucial concerns post-Brexit relate to the terms under which Britain will retain access to the EU’s single market, the destination for around 50% of its exports. Brexit supporters claim both parties (not simply the UK) have strong incentives to expedite negotiations for a free-trade deal.  The reality established by over fifty years of precedents is much less sanguine.  All countries with comprehensive access to the EU’s single market, crucially one incorporating financial services, are required to observe the vast majority of its regulations, contribute significantly to the budget (around 90% of the UK’s net per capita payment) and accept free movement of EU migrants. Trade deals negotiated by countries such as Canada only circumvent these later requirements at the costs of having to contend with non-tariff trade barriers and excluding financial services. Omitting the latter is impossible for the UK, as it would inhibit London’s ability to respond to any Eurozone challenges to its current status as the financial centre of Europe. Brexit proponents also appear overly optimistic concerning the prospects of reaching an acceptable agreement.

As The Economist recently highlights, to prevent setting a precedent for future countries considering a possible separation from the EU, the incentives for EU negotiators are not aligned with offering favourable terms to a partner who is unilaterally demanding a divorce while still attempting to retain their nuptial rights. The departure of Greenland’s tiny economy from the EU in 1985 was followed by over three years of protracted negotiations, even though it remains a dependency of Denmark.

Additionally, the UK would be required to re-negotiate more than 50 trade deals the EU currently has with its other international trading partners such as the China, India and the US from which a post-Brexit Britain would be excluded. A priori, it is very difficult to justify the diversion of the UK’s political and technical expertise from the more growth orientated economic management that these unnecessary distractions will involve.

So, what are the central elements which constitute the focus of Brexit lobbyists’ opposition to continued EU membership? First, they assert that EU regulations inhibit UK corporate growth. The reality is the opposite. According to the OECD, markets for goods and labour in the UK are among the developed world’s least regulated, comparing favourably with the US, Australia and Canada. Indeed, as Britain was at the forefront of introducing much EU legislation on the environment, minimum wages and planning, the majority of regulations are likely to remain in the UK even post-Brexit. Second, proponents of Brexit maintain it would allow Britain to reassert control over its own borders. This ignores the facts that (i) migrants are net contributors to the UK economy, so imposing stricter controls on immigration (a policy adopted by many supporters of Brexit) would actually inflict economic damage; (ii) such a policy will restrict access to the EU’s single market, especially in services; (iii) migrant controls could have repercussions for millions of UK citizens domiciled in other EU countries. Finally, the argument is that Brexit would enable to UK to reassert its parliamentary sovereignty and the primacy of the UK judicial system. While this may be true in principle, the reality is that maintaining global influence requires the UK’s membership of strategically important economic and political networks, able to exercise real power. To avoid relegation to the status of a marginal, second-rank nation, and to continue exerting important geopolitical influence, especially with the US and China, the UK must embrace a leadership role in Europe. The UK’s demands must not be the exclusive focus of attention in the Brexit debate. Recent developments with Schengen, the rise of populism, and movements away from the rule of law and independent judiciaries in certain countries, are manifestations of the paradox that internally the EU is becoming weaker while simultaneously enhancing its external global diplomatic profile. Multilateral benefits can only be conferred by the continuing EU presence of a strong UK, willing to exert international leadership.