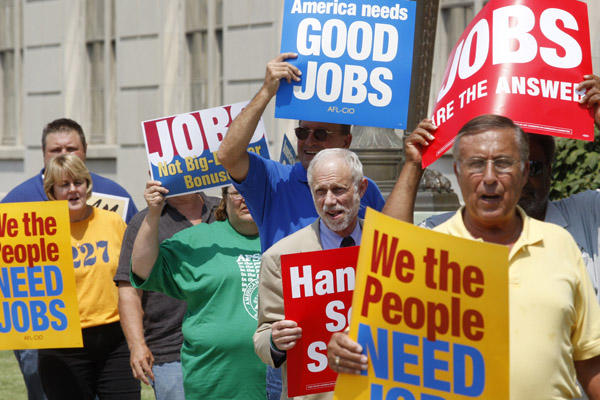 United Steelworkers (USW) International President Leo W. Gerard issued the following prepared statement at a press conference this week where the Economic Policy Institute (EPI) released a study outlining the jobs lost from the US-China trade deficit since 2001. The EPI study identifies job losses in every state and congressional district.

“EPI’s study paints a stark picture of the damage that the growing US trade deficit with China has inflicted on workers. Since China joined the World Trade Organization (WTO) in 2001, more than 3.4 million jobs have been lost across the country. No state or congressional district has been immune from the negative impact of China’s trade policies.

“China has used virtually every tool, legal and illegal, to steal our jobs and undermine our manufacturing base and economy. Subsidies, dumping, overcapacity, currency manipulation and cyberespionage are all practices used by China to help amass a $3.9 trillion trade surplus since 2001. Mounting trade deficits are sapping our economic strength and undermining our national security. It’s time to demand that China play by the rules.

“The USW is the largest industrial union in North America. Our members know firsthand the impact of China’s policies. We have participated in or initiated dozens of trade cases at tremendous cost – money and jobs – to respond to China’s actions. Our government needs to recognize how its flawed trade policies have damaged workers and their communities, while corporations and Wall Street have reaped profits. We need a new approach to trade that puts working families first.

“Trade played an enormous role in last year’s campaigns. Promises have been made to address these problems, but time is growing short. Working Americans want change and expect their leaders to take action rather than continuing to cater to the special interests who offshore production and outsource jobs. Talk is cheap and threats are easy.

“What is needed is a clear, consistent and comprehensive approach to deal with China’s protectionist and predatory trade practices. Politicians have talked about the need to change our nation’s trade policies, but slogans and speeches are no substitute for action.”

To see full report, click here. For more on the EPI, go to www.epi.org