1. David Tepper – Betting on the Beleaguered Banks Result: $7 Billion Profit Imagine yourself back in 2009 and the Global financial crisis had hit like a sledgehammer; the Dow Jones was on the floor and some of the biggest banks like Lehman Brothers and Bear Stearns, ever-present on Wall Street had closed their doors for […] 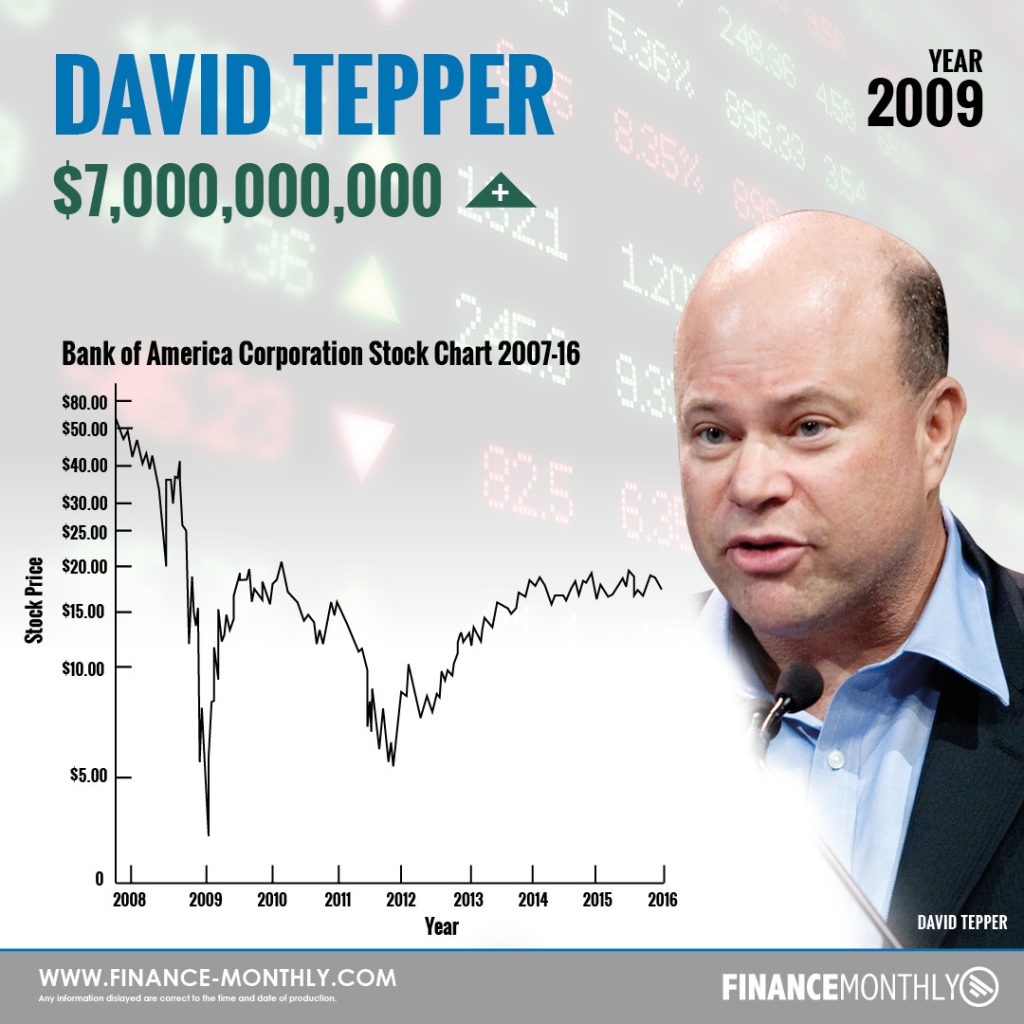 Imagine yourself back in 2009 and the Global financial crisis had hit like a sledgehammer; the Dow Jones was on the floor and some of the biggest banks like Lehman Brothers and Bear Stearns, ever-present on Wall Street had closed their doors for the final time. As money and trust continued to flow out of the banks and talk of nationalisation reared its head you would have to have been stupid to buy bank stocks. Or so everyone but David Tepper thought.

David Tepper began his financial career with an MBA and a treasury position at Republic Steel. He was recruited by Goldman Sachs in 1985 as a credit analyst and within 6 months, he was the head trader on the high-yield desk. Deciding to leave Goldman in 1992 and set up his own fund, Appaloosa Management, he began trading on his own in 1993. In the years that followed, Tepper’s fund was known for its volatility but still managed to yield an average of 30%, which meant that when he came out of 2008 25% down, his investors stuck by him. A decision that would reap significant rewards.

While everyone else was distracted by what was happening in the moment, Tepper saw the long game and decided to move his fund into the most dangerous market in town: Banking. Tepper made his play in early 2009 as the big banks stocks were so depressed that onlookers were convinced more would be closing within 6 months. By contrast, Tepper became convinced that the banks would rally. He studied a Government white paper released in February 2009, announcing its Financial Stability Plan, which was designed to shore up the banks. The Government was buying in bank stocks which would be converted into common shares at prices exceeding the current value. Tepper decided it was time to buy. He purchased some of the biggest banks common stocks at very low values in big numbers. Tepper’s firm reportedly purchased Citigroup shares at 19 cents to the dollar and Bank of America at 12 cents to the dollar, in addition to roughly $1 billion worth of AIG’s commercial mortgage securities at $9 cents on the dollar. He sat back throughout 2009 and watched them double, then treble and, in BOA’s, case quadruple within a year. As Appaloosa returned 132.7% by the end of the year to net, Tepper made a staggering $7 billion. The move was so gutsy, it has almost become folklore, with some people claiming Tepper keeps a pair of brass testicles on his desk: a reflection of the steel it took to enter that market at that time.

Tepper was named as Institutional Hedge Fund Manager of the Year for 2009, as he earned $4 million personally from his bet on the banks. His success has continued and he was named Forbes’s Top Hedge Fund Earner of 2012. Although by his own words his fund is “consistently inconsistent”, he regularly features in the top hedge fund managers year on year.