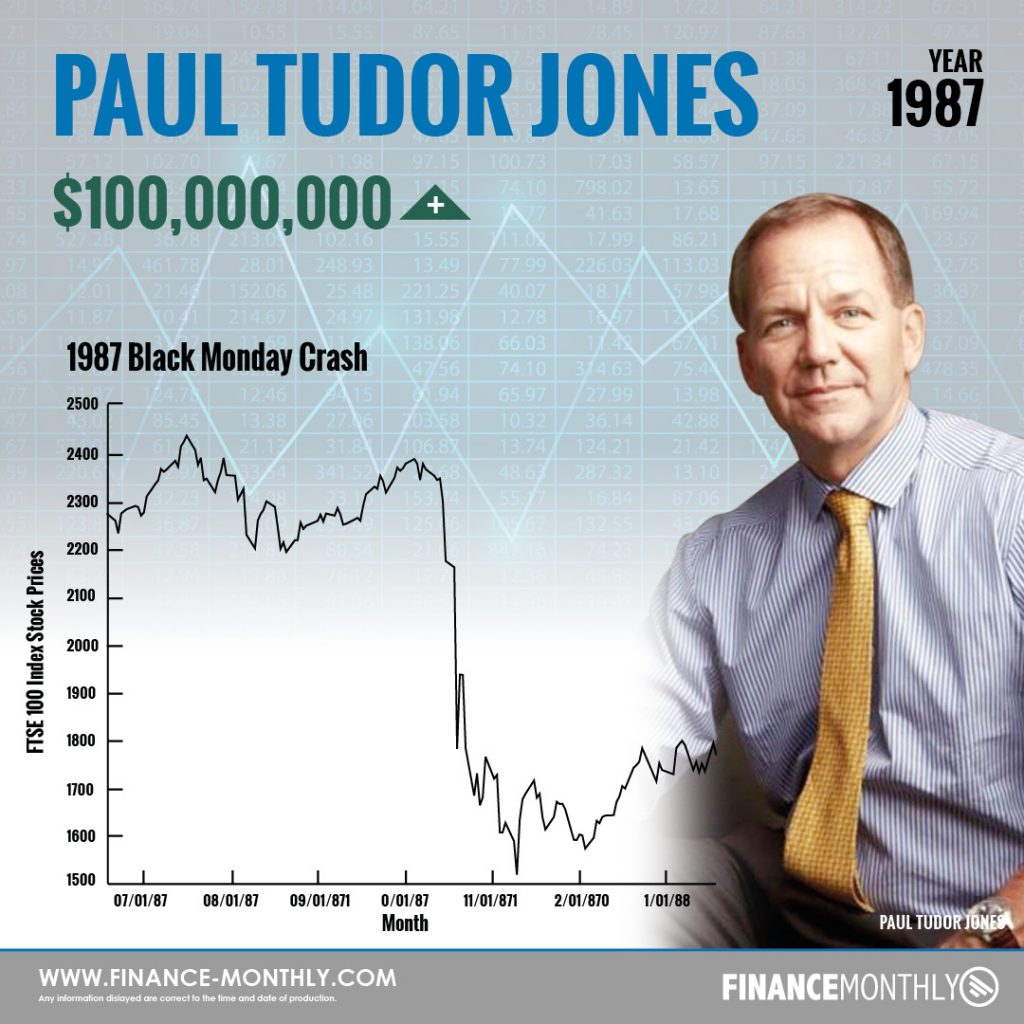 Black Monday occurred in October 1987, but Paul Tudor Jones saw it coming well before that.

“There will be some type of a decline, without a question, in the next 10, 20 months, and it will be earth-shaking; it will be saber-rattling.”

Tudor Jones cut his teeth on the trading floor in 1976, but despite a profitable few years he declared himself to be bored and enrolled at Harvard business school, only to pull out at the last minute to continue learning his craft trade by trade. Following a spell working for commodity broker Eli Tullis, he founded the Tudor Investment Group in 1980 quickly becoming a successful Macro fund manager.

In 1987 in a seemingly buoyant market, Tudor Jones started to spot a significant over-valuation in stocks. He and his co-workers at his Tudor Group, in particular his second in command, Peter Borish, spent hours huddled over graphs of the Wall Street crash of 1929, analysing the historical markets and sales data and noted direct comparisons to the 1929 markets preceding the infamous crash. With that information, they pulled off one of the greatest trades in Wall Street history.

Two weeks before that fateful October day in 1987, the Tudor Investment Group began positioning itself, trading against the market aggressively as the rest of Wall Street remained either oblivious or unprepared for the bubble to burst. By the close of business on the 19th October, the Dow Jones had dropped a whopping 22% in one day, breaking numerous records including its largest ever percentage drop at the time requiring the graphs used by television studies to be re-drawn with new lower limits. Tudor Jones walked away with $100 Million dollars and a reputation as one of the shrewdest traders around.

The trade became legend following the release of a PBS documentary ‘Trader’, a documentary following Tudor Jones throughout 1987. Tudor Jones hated the documentary so much that he reportedly demanded it be taken out of circulation and bought up as many copies of the VHS version as possible. Occasionally, it resurfaces online for a matter of hours before being quickly removed, but if you can find a copy, it remains a fascinating watch.

Unlike Livermore, Tudor Jones has continued his successes on the trading floor and is currently rated by Forbes as one of the Highest earning hedge fund managers in the world. Last reports put the assets managed by Tudor Jones over $18 billion.

Next: One Man vs. The Kiwi