7. Louis Bacon – Betting on Saddam Hussein and the Iraq War Result: 86% Return Bacon had already secured a win betting against the markets on Black Monday at the same time as Paul Tudor Jones, but that wasn’t his biggest triumph. Louis Bacon begun his trading career as a student studied for his MBA […] 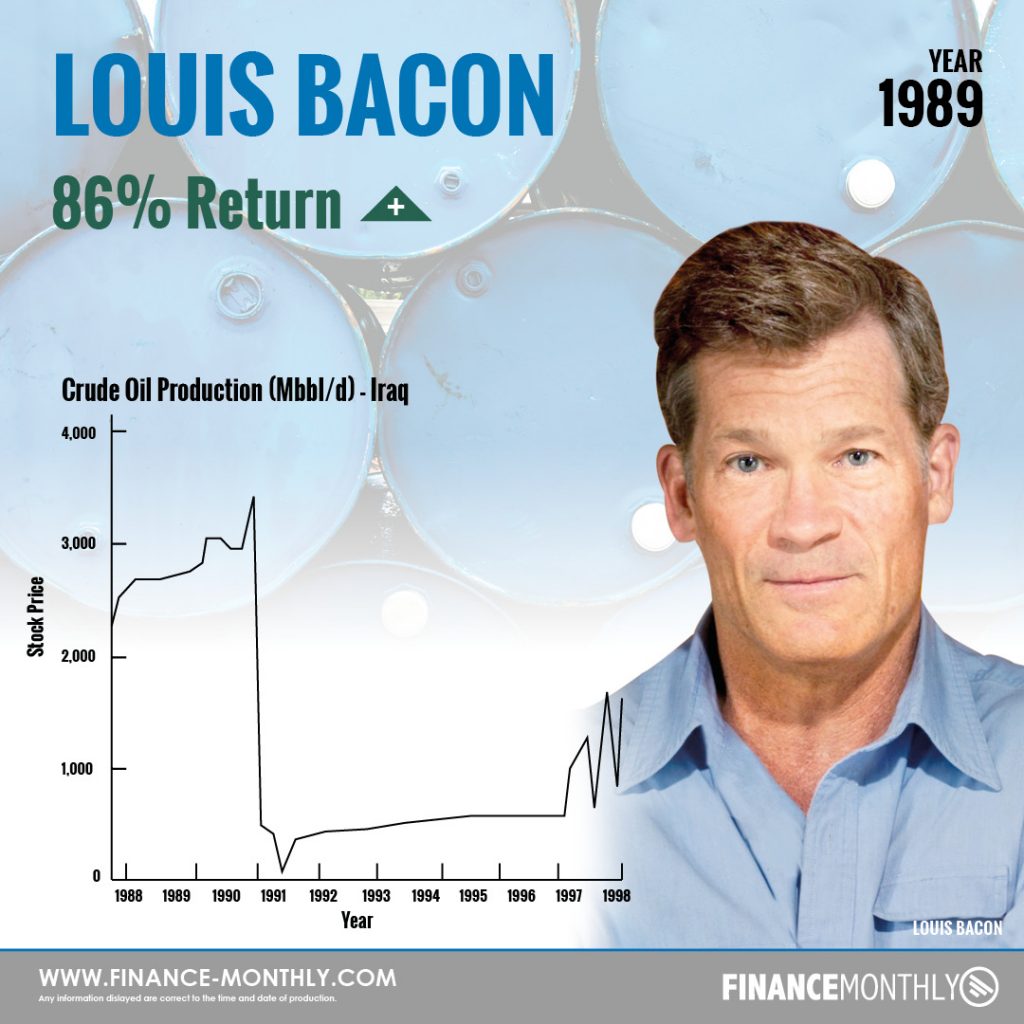 7. Louis Bacon – Betting on Saddam Hussein and the Iraq War

Bacon had already secured a win betting against the markets on Black Monday at the same time as Paul Tudor Jones, but that wasn’t his biggest triumph.

Louis Bacon begun his trading career as a student studied for his MBA at Columbia Business School.  Unlike many others though, his learning wasn’t restricted to the classroom.  Bacon actually traded commodities during his first three semesters using a loan to get the money he needed.  It was to be a humiliating start.  Having made losses every year he resorted to asking his father for a loan to cover his basic needs.  In his fourth and final year Bacon turned a profit and it seemed learned some valuable trading lessons.

After a few years of success and significant corporate ladder-climbing, including stints at Banker’s Trust and working his way up to Vice President of the futures trading division at Shearson Lehman Brother, he formed his own company, Moore Capital Management LLC in 1990 with $25,000 he inherited and shortly after pulled off one of the greatest trades ever.

In fact, Louis Bacon can lay claim to being better at predicting the fallout of international politics than those in the C.I.A. Spotting trends of growing antagonism from Saddam Hussain’s regime in 1990 towards oil-rich neighbour Kuwait, Bacon decided to engage in some unconventional techniques by trading in macro investments to go long on oil and short on stocks.

When the Iraqi tanks rolled across the border, the rest of the world watched international relations escalate at the same time as Bacon watched his profits do the same. That year, his company started with a fund of around $100 million in 1990 and by the end of the year had returned a quite unbelievable 86%. There has never been an exact figure released on the trade and it sits in with another brilliant Bacon move of shorting the Nikkei index as the Japanese Markets collapsed, but suffice to say the trades around the Iraq War have gone into macro investment, and indeed Wall Street legend.

Moore Capital Management and Bacon continue to perform even as other legendary macro funds have significantly scaled back such as George Soros’s Quantum, and others cease altogether like Julian Robertson’s Tiger Management.

The notoriously elusive Bacon continues to sit at the top of the trading tree, returning between 25 – 35% a year for over a decade. While others fluctuate wildly, Bacon’s ability to read markets continues to reap rewards for those who invest with him.