Refugee crisis, political turbulences, economic struggles brought on by austerity and Brexit. Katina Hristova explores the crisis that the European Union has found itself in.   “The fragility of the EU is increasing. The cracks are growing in size”, warns EU Commission Chief Jean-Claude Juncker. With Italy’s Government crisis finally being resolved and the country’s […] 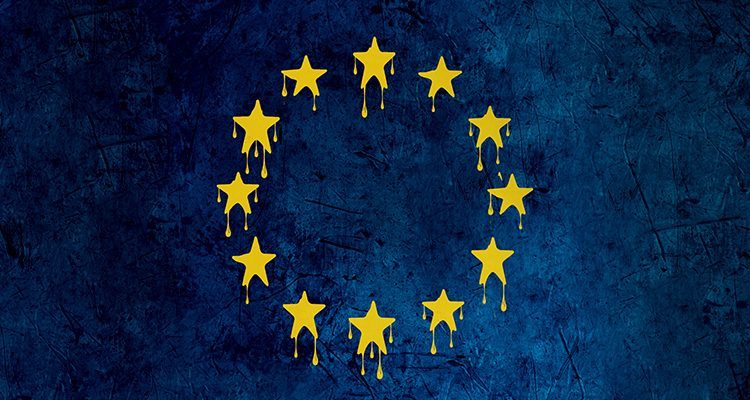 Refugee crisis, political turbulences, economic struggles brought on by austerity and Brexit. Katina Hristova explores the crisis that the European Union has found itself in.

“The fragility of the EU is increasing. The cracks are growing in size”, warns EU Commission Chief Jean-Claude Juncker. With Italy’s Government crisis finally being resolved and the country’s shocking rejection of NGO migrant rescue boats, it has been easy to detract from the political earthquake that the third largest EU economy experienced and the quick impact that it had on the Euro. But Europe’s problems go deeper than Italy’s political turbulences. A month ago, Spain, the fourth biggest Eurozone economy, was faced with a very similar crisis and even though the country now has a new leader, analysts believe that the Spanish instability is not over yet. With the shockwaves of both countries’ political uncertainty being felt on Eurozone markets, on top of migration pitting southern Europe against the north and as the UK marches on towards Brexit whilst Trump abandons the Iran Nuclear Deal, which could mean the end of the transatlantic alliance between the US and Europe, is the EU in serious trouble?

Why is it so serious?

Billionaire Investor George Soros is one of those people that can sense when social change is needed and when the current cultural and political processes are about to collapse. A month ago, in a speech at the European Council on Foreign Relations, Soros claimed that: “for the past decade, everything that could go wrong has gone wrong”, believing that the European Union is already in the midst of an ‘existential crisis’. The post-2008 policy of economic austerity, or reducing a country’s deficits at any cost, created a conflict between Germany and Greece and worsened the relationship between wealthy and struggling EU nations, creating two classes – debtors and creditors. Greece and other debtor nations had sluggish economies and high unemployment rates, struggling to meet the conditions their creditors set, which resulted in resentment on both sides toward the European Union. Back in 2012, the European countries that struggled with immense debt, malfunctioning banks and constant budget deficits and needed help from other member countries were Portugal, Ireland, Greece and Spain. In order to help them the creditors countries set conditions that the debtors were expected to meet, but struggled to do so. And as Soros points out: “This created a relationship that was neither voluntary nor equal – the very opposite of the credo on which the EU was based”.

Although Italy finally has a government, after nearly three months without one, the financial markets are apprehensive about what to expect next, considering the country’s €2.1 trillion debt and inflexible labour market. On 29 May, fearing the political crisis in the country, the Euro EURUSD, +0.6570%  slid to a six-month low, whilst European stocks ended sharply lower, with Italy’s FTSE MIB I945, +1.43%  ending 2.7% lower, building on the previous week’s sharp losses. Bill Adams, senior international economist at PNC believes that: “The situation serves as a reminder that political risk in the Euro area hasn’t gone away. Italy is not on an irrevocable road to anything at this point,” he said. “I think what is most likely is another election later this year, and what we’ve learned is that outcomes of elections are very unpredictable.”

Spain on the other hand has made huge progress since being on ‘EU life support’ when ‘its banks were sinking and ratings agencies valued its debt at a notch above junk, on a par with Azerbaijan’. Since receiving help, the country’s economy has been growing, unemployment is not as high and its credit rating has been restored. However, with the Catalonia separatism, and the parties, Podemos and Ciudadanos who have emerged to challenge the old duopoly between the Popular Party (PP) and the Socialists, the political uncertainty in the country is set to continue.

Greece has been in a permanent state of crisis for a decade now, with its current debt of 180% of its gross domestic product (in comparison, Italy’s is 133%). In less than two months, on 20 August, the country is due to exit its intensive care administered by the European Central Bank and International Monetary Fund. The EU will then have to come up with a new debt relief offer on the $280 billion Greece still owes – which could be challenging, as the ‘creditors’ are not in a charitable mood.

In contrast, Poland and Hungary are financially stable, however, both countries seem to be in opposition to the EU with regards to immigration, the independence of the judiciary, ‘democratic values’ and freedom of the press. Both governments have dismissed EU plans to share the burden that the Mediterranean region carries in terms of migrants arriving into these countries. In addition to this, Hungary’s Prime Minister is promoting an ‘illiberal’ alternative to European consensus, whilst Poland has sided with the US and against its European partners on a range of subjects, including the Iran sanctions and Russian gas pipelines.

And of course, let’s not forget the EU’s list of unsolved issues – the main one being Brexit. With nine months until its deadline, the terms of Britain’s exit from the EU are nowhere near finalised.

Make the EU an association that countries want to join again

Today, young people across the continent see the European Union as the enemy, whilst populist politicians have exploited these resentments, creating anti-European parties and movements.

Since its establishment, the EU, an association that was founded to offer freedom, security and justice without internal borders, has survived many turbulences. Although the current crisis is based on a number of deep-rooted problems, odds are that these challenges will be overcome. To save the EU, Soros believes that it needs to reinvent itself via a ‘genuinely grassroots effort’ which allows member countries more choice than is currently afforded.

“Instead of a multi-speed Europe, the goal should be a ‘multi-track Europe’ that allows member states a wider variety of choices. This would have a far-reaching beneficial effect.”

And even though he isn’t offering a proposition for a bill that someone needs to draft and pass as soon as possible, he has opened a conversation – a conversation about moving away from the EU’s unsustainable structure. “The idea of Europe as an open society continues to inspire me”, says Soros. And in order to survive, it will have to reinvent itself.