Located in the Heart of Hungary’s historic capital city, The Corinthia Hotel Budapest is one of the most luxurious hotels in the region and is within walking distance of several of the city’s most exciting attractions. Formerly known as the Grand Hotel Royal, much of the building was sadly destroyed in the 1956 Hungarian Revolution […] 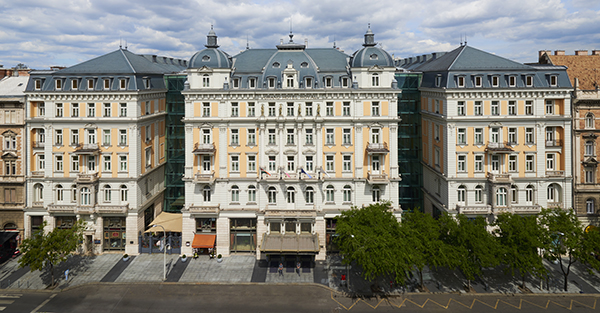 Located in the Heart of Hungary’s historic capital city, The Corinthia Hotel Budapest is one of the most luxurious hotels in the region and is within walking distance of several of the city’s most exciting attractions.

Formerly known as the Grand Hotel Royal, much of the building was sadly destroyed in the 1956 Hungarian Revolution and despite re-opening its doors in the 1960s, the Grand Royal remained a shadow of its former self. That was until new owners, Corinthia Hotels, started an extensive restoration project in the 1990s that would retain the best of the old, while sensitively adding the new. Once restored to its original glory, the newly named Corinthia Hotel Budapest re-opened its doors as a luxury property in 2003. While the gracious frontage, extravagant marble floors, the amazing sweeping staircase and breathtaking, six-storey Atrium preserved from the original building offer glorious hints of a bygone age, the levels of comfort and convenience are all reassuringly up-to-date.  Over a century of heritage has been perfectly restored with no expense spared for a new generation of travelers.

Corinthia Hotel Budapest boasts a staggering 439 rooms, including 31 suites and 26 Royal Residences. I was lucky enough to stay in the spacious and luxurious Junior Suite. The room featured a bedroom with the most comfortable king size bed, an expansive living area, an impressive marble bathroom, comfortable sofas and all the luxuries that you would expect from a premium hotel including satellite TV, complimentary Wi-Fi and a Nespresso coffee machine. 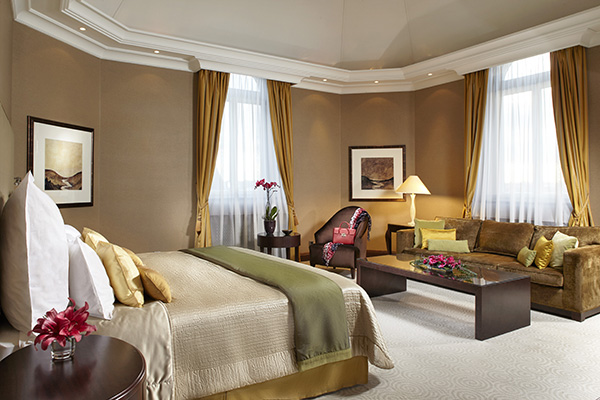 From fine dining, to a casual meal, you will be truly spoilt for choice when dining at the Corinthia Hotel Budapest where every palate is catered for in their four lavish restaurants.

During my stay at the Corinthia Hotel Budapest, I chose to eat in the The Brasserie and Atrium restaurant which offers delicious International and Hungarian dishes. It is an ideal place for both business and casual meetings. The restaurant is open all day, beginning with the morning buffet breakfast, through to lunch and then á la carte dinner. Uniquely in Hungary, on every Sunday, the Brasserie and Atrium restaurant presents themed brunches, where besides culinary joys, the focus is on entertainment and live experiences.

Guests staying in Deluxe or above rooms will also benefit from use of the Executive Club which offers complimentary breakfast, fine Hungarian wines, a wide range of spirits, non-alcoholic beverages, snacks, tea, coffee and refreshments throughout the day. The Executive Club was designed for today’s discerning traveler and is the ideal environment for conducting business and relaxing while working away from the office. 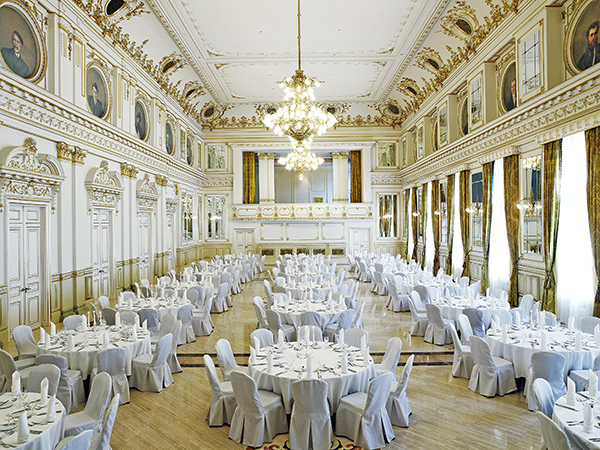 For more information about dining at the Corinthia Hotel Budapest, please visit www.corinthia.com/en/hotels/budapest/dining

Steeped in history, The Royal Spa is a unique attraction from the 19th century and has been given a new lease of life – remodeled as a luxurious and contemporary spa with a 15-meter pool.

The pool first opened in 1886, at that time it contained steam baths, wave and shower baths, electric baths, a pneumatic chamber and a medical room with cold water. The spa operated until 1944 when it closed for many years. The abandoned, obsolete spa was rediscovered in 1983 and, according to the original documents, there were plans to use the spa area for parking facilities. Thankfully, the proposal was turned down and the spa has since been beautifully restored to its original splendor offering the perfect place to relax and unwind after a busy day taking in all that the beautiful city of Budapest has to offer.

Also available at the Royal Spa is an extensive menu of treatments, including a range of luxury wellness and therapeutic body, face and massage treatments along with a fitness room, saunas, steam bath, jacuzzi, and various relaxation areas.

Whilst Budapest is known as the city of Baths, you need look no further than The Royal Spa when you are wanting to relax and unwind, it is the jewel of luxury at Corinthia Hotel Budapest. Within the framework of its classical interiors, the Royal Spa has been carefully redesigned to provide over 1,000 m2 of vitality, tranquility and well-being. 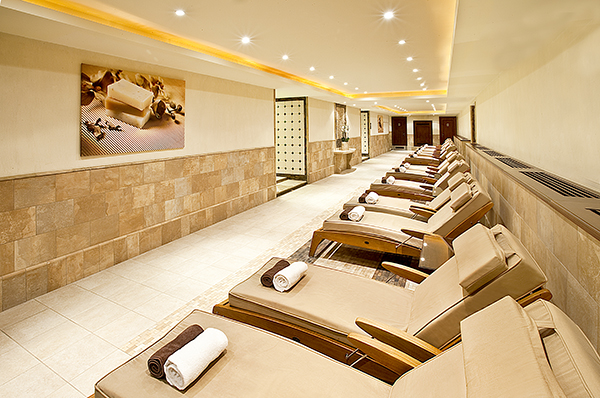 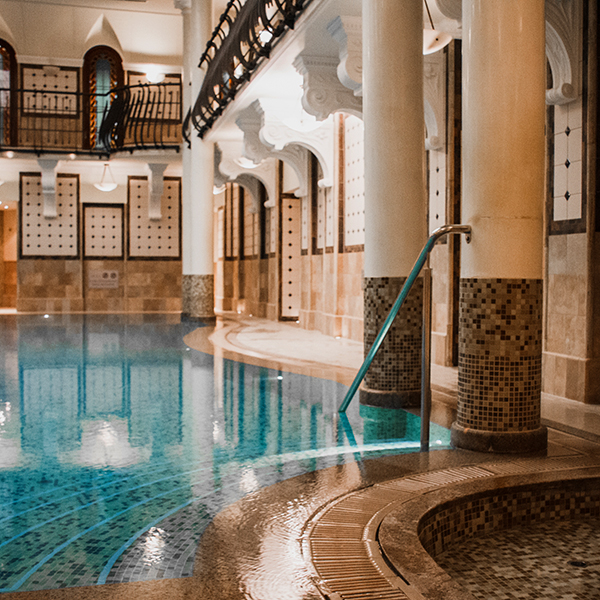 Perfect for conferences, the Valletta Exhibition centre is a showpiece of 21st century architecture and technology, offering a large event or display space which can be partitioned to create up to 12 syndicate rooms or opened to create large event spaces with refreshment areas.

The facilities also include a Grand Ballroom which offers the perfect venue for a truly unforgettable event. The Ballroom has been restored to its original beauty with rich, baroque-style decorated ceilings and walls and is connected to the Valletta Exhibition centre via a glass bridge meaning the two centres can easily be linked to support a more extravagant, large-scale event.

Then there is the Royal Lounge which is elegantly furnished and features private meeting rooms, boardrooms and rest sections, all fully equipped with built-in smart screens, a wireless printer and mobile chargers, making it the perfect place to meet clients.

For more information and to book your stay at Corinthia Hotel Budapest, head to 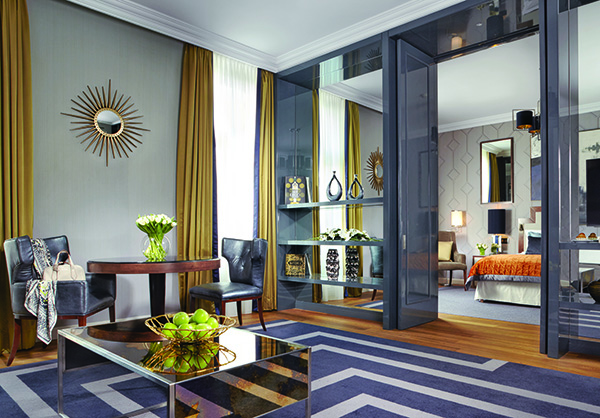 Budapest, the capital city of Hungary, is divided by the River Danube. Once two cities known as Buda and Pest, they are now connected by the 19th-century Chain Bridge.

Here, we take a look at the top things to do whilst visiting this wonderful city. 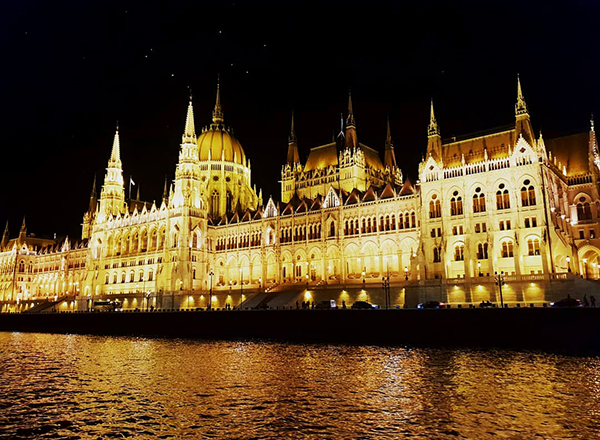 Situated on the banks of the River Danube, Parliament building is sure to take your breath away. Take an evening river cruise along the Danube to see this amazing building at its best. A guided tour of Parliament is also advisable where you can admire the architecture and grand decoration whilst learning the history of this magnificent building.

Shoes on the Danube Bank

Also situated on the banks of the River Danube and just a short stroll from the Parliament building are the Shoes on the Danube Bank, a memorial to honour the people who were killed by fascist Arrow Cross militiamen in Budapest during World War II. They were made to take off their shoes, and were shot at the edge of the water leaving their bodies to fall into the river and were carried away. The iron sculptures represent their shoes left behind on the bank.

A major square in Budapest that contains statues featuring the Seven chieftains of the Magyars and other important Hungarian national leaders, as well as the Tomb of the Unknown Soldier.

The third largest church building in Hungary, named in honour of Stephen, the first King of Hungary whose right hand is supposedly housed in the reliquary.

Take a ride on the Funicular up Buda Hill to the Castle District and admire the spectacular views of Budapest along with the historic attractions of Buda Castle, the Royal Palace, St Matthias Church and Fishermen’s Bastion.

All of the above are within walking distance of Corinthia Hotel Budapest, but are also easily accessible via Budapest’s extensive transport network. A tram stop along with a bus stop are situated right outside the hotel.