Venezuela is a contradiction – it remains the country with the largest proven oil reserves on the planet, and yet, it is also a country whose people are starving and in some cases, dying from hunger or illnesses. 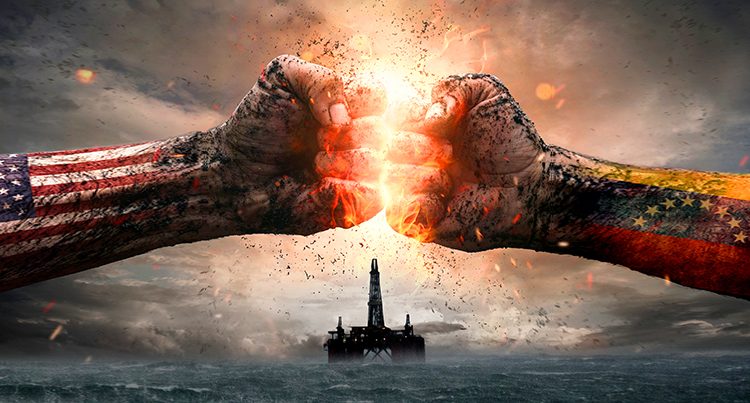 The so-called ‘resource curse’ has reduced a once prosperous nation into a financial meltdown. The increased social and economic upheaval has sparked protests on a nationwide level and led many poor people to lose faith and withdraw their allegiance to President Nicolás Maduro. Amidst the political and economic turmoil, the EU, the US and a number of other countries across the globe have recognised opposition leader Juan Guaidó as the South American nation’s rightful interim president. In a bid to alleviate “the poverty and the starvation and the humanitarian crisis” currently gripping Venezuela and stop “Maduro and his cronies” looting the assets of the country’s people, US President Donald Trump has announced sanctions against Venezuela’s state-owned oil company PDVSA. US National Security Adviser John Bolton announced that the measure will “block about $7 billion in assets and would result in more than $11 billion in lost assets over the next year”. Effective from 29th January, the sanctions guarantee that any purchases of Venezuelan oil from US entities flow into blocked accounts and are supposed to be released only to the country’s legitimate leaders.

The situation in Venezuela has puzzled social scientists for years. On paper, oil-exporting countries and their economies are supposed to be thriving. Why is this not the case for Venezuela and what does the ‘resource curse’ have to do with it?

The resource curse is a concept that a number of political scientists, sociologists and economists use to explain the deleterious economic effects of a government’s overreliance on revenue from natural resources.

In Venezuela’s case, being overconfident in its status as an oil powerhouse, the country’s socialist government became so dependent on oil production that it managed to lose track of its food production. Farms and other similar industries were expropriated by the government, which combined with the lack of private ownership due to the country’s socialist regime, led to a massive decrease in food production. Crop farmers weren’t able to acquire pesticides from now-government owned chemical companies, animal farmers weren’t able to acquire feed from crop farmers and food depleted. Nationalising businesses meant that business owners were forced to stop food production, while the government ignored food production altogether due to its full reliance on oil riches, which became the main focus.

As with any commodity, stock or bond, though, the laws of supply and demand cause oil prices to change. In 2014 for example, when oil prices were high, Venezuela’s GDP per capita was equivalent to 13,750 USD, while a year later, due to a dip in oil prices, it had fallen 7%.

This example perfectly illustrates the resource curse concept. A country, in most cases an autocratic country, becomes so dependent on a single natural resource that it disregards all other industries. The government is happy because the revenue is enough to feed them and secure their position of power. Naturally though, over time all other branches of the economy slow down to the point when the commodity prices inevitably drop, the country’s economy is not equipped for survival. According to the concept, the resource curse is an issue seen in the Middle East, however, it has never been so clearly displayed as it is now in Venezuela.

US Sanctions & their Impact

As mentioned, the oil industry is the main sector that is responsible for Venezuelan government’s revenues – for more than 90% of revenues to be precise. Before delving into the way the sanctions are expected to affect the country’s economy, let’s take a look at the country’s oil production stats. According to data from Rystad Energy, in 2013, Venezuela was producing 2.42 million barrels per day, while the output today is lingering above the 1 million mark. Production has been dropping more intensely in recent months and even without the recent US sanctions, the oil production in the country would have experienced a drastic drop due to lack of investment. Trump’s administration’s restrictions are only rubbing salt into the wound.

Even though the White House’s intention is to make oil revenues reach the people of Venezuela and bypass Maduro’s government, which owns most of the oil industry through PDVSA, the sanctions have the power to be disastrous for the country’s economy and potentially set off a domino effect in the global energy market. Two things are worth mentioning here: Venezuela used to be the fourth biggest crude importer in the US (after Canada, Saudi Arabia and Mexico), while the US is Venezuela’s number one customer. Thus, the problems that arise from the sanctions are that A) US Gulf Coast refineries are frantically looking for alternate sources for the crude oil that Venezuela has been providing them with up until now and B) Venezuela, on the other hand, is struggling to find new customers. On top of this, the US was Venezuela’s key source of naphtha, which is the hydrocarbon mixture used for diluting crude. Without it, PDVSA won’t be able to prepare its crude oil for export. Rystad Energy forecasts that some operators in Venezuela will run out of the crucial diluent by March.

However, not all hope is gone. Paola Rodriguez-Masiu from Rystad Energy believes that the impact of the sanctions will be significantly lower than Washington has predicted and says that: “The oil that Venezuela currently exports to the US will be diverted to other countries and sold at lower prices. For countries like China and India, the news was akin to Black Monday. They will be able to pick up these oil volumes at great discounts.” She adds that Venezuela exports 450,000 barrels of oil per day to the US – a little under half of its total output and the amount of new oil which will flood the markets. Mrs Rodriguez-Masiu also mentions that so far, oil markets have massively shrugged off this new oversupply as investors have been pricing in the crisis in Venezuela for quite a long time.

Although Venezuela is still seen as an oil powerhouse, especially due to its production of heavy crude (which is not widely available in the world), the oil world is expecting the historic collapse of its oil output to only intensify. The country needs to offset the effects of the US sanctions, find new financing and not let the people of Venezuela bear the brunt.

This will not be easy though. As the government desperately courts new buyers for its oil, it may find them hard to come by, with Chinese sales in a pattern of decline and new markets such as India worried about quality and transport issues due to much of Venezuela’s shipping designed for shorter distance travel. Indeed the government and prospective buyers will only be too aware that it is always harder to negotiate from a position of weakness.

Unfortunately for the people of Venezuela who are struggling to get basic supplies, and are facing starvation and illness, the actions and the effects of the country’s government and the oil curse look set to reverberate for some time.