Katina Hristova explores the 5 biggest threats the world economy is currently faced with. 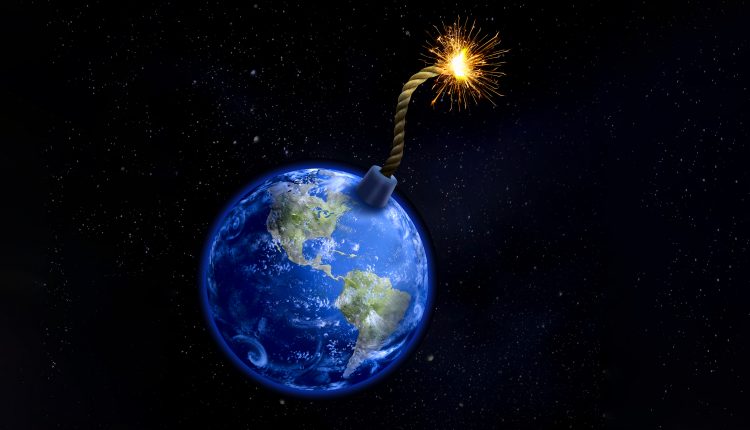 Back in 1930, the US introduced the Smoot-Hawley Tariff Act, which raised their already high tariffs, triggering a currency war and, as economists argue, exacerbating the Great Depression. With President Donald Trump’s threat to put 10% tariffs on the remaining $300 billion of Chinese imports that aren’t subject to his existing levies, sending markets tumbling from Asia to Europe, the question on everyone’s lips is: Is history about to repeat itself?

In August, in a bid to hit back against Trump’s administration, Beijing allowed the Chinese yuan to plummet past the symbolically important $7 mark. Economists suggest that this currency manipulation is China’s attempt to display dominance and gain the upper hand in the trade war between the two countries as devaluating its currency could help counteract the effects of US’s long list of tariffs on Chinese goods.

As protectionist actions escalate and US-China relations continue deteriorating, investors and markets have been growing increasingly concerned even though Trump has delayed the imposition of his new tariffs until December. A full-blown trade war wouldn’t be good news to anyone and could seriously weaken the global economy, as the IMF has warned, making the world “poorer and more dangerous place”. Both sides are expected to experience losses in economic welfare, while countries on the sidelines could experience collateral damage. Furthermore, if tariffs remain in place, losses in economic output would be permanent, as distorted price signals would prevent the specialisation that maximises global productivity. The one thing that’s certain, no matter how things pan out, is that there will be no winners in this war.

Economists suggest that this currency manipulation is China’s attempt to display dominance and gain the upper hand in the trade war between the two countries as devaluating its currency could help counteract the effects of US’s long list of tariffs on Chinese goods.

Millions, if not billions, of people’s data has been affected by numerous data breaches in the past couple of years, whilst cyberattacks on both public and private businesses and institutions are becoming a more and more frequent occurrence. With the deepening integration of digital technologies into every aspect of our lives and the dependency we have on them, cybercrime is one of the greatest threats to every company in the world.

Cyberattacks are rapidly increasing in size, sophistication and cost, as cybercrime and data breaches can trigger extensive losses. In 2016, Cybersecurity Ventures predicted that cybercrime will cost the world $6 trillion annually by 2021, up from $3 trillion in 2015. According to them, ”this represents the greatest transfer of economic wealth in history, risks the incentives for innovation and investment, and will be more profitable than the global trade of all major illegal drugs combined”.

With political instability, external imbalances and poor policymaking which has led to full-blown currency crises in the two nations, Turkey and Argentina have been at the centre of an emerging market sell-off last year. But they are not the only emerging economies faced with a currency crisis – according to the EIU, some economies which are already in the danger zone and could suffer from the same currency volatility include Brazil, Mexico and South Africa.

Still far from catching up with the developed world, many supposedly emerging markets are developing at a slower pace, which combined with the threat of a global trade war and higher borrowing costs on the rise, has made investors pull in their horns.

If the currency crises in Turkey and Argentina continue and develop into banking crises, analysts predict that investors could abandon emerging markets across the globe. “Market sentiment remains fragile, and pressure on emerging markets as a group could re-emerge if market risk appetite deteriorates further than we currently expect”, the EIU explains.

In recent months, the media is constantly flooded with reports on the horrifying environmental risks that the climate crisis the Earth is in the midst of poses, but we’re also only starting to come to grips with the potential economic effects that may come with it.

Despite the significant degrees of uncertainty, results of numerous analyses and research vary widely. A US government report from November 2018 raised the prospect that a warmer planet could mean a big hit to GDP. The Stern Review, presented to the British Government in 2006, suggests that this could happen because of climate-related costs such as dealing with increased extreme weather events and stresses to low-lying areas due to sea level rises. These could include the following scenarios:

Due to climate change, low-lying, flood-prone areas are currently at a high risk of becoming uninhabitable, or at least uninsurable. Numerous industries across numerous locations could cease to exist and the map of global agriculture is expected to shift. In an attempt to adapt, people might begin moving to areas which will be affected by a warmer climate in a more favourable way.

A US government report from November 2018 raised the prospect that a warmer planet could mean a big hit to GDP.

All in all, the economic implications of the greatest environmental threat humanity has ever faced range from massive shifts in geography, demographics and technology – with each one affecting the other.

Fears that the UK could be on the brink of its first recession in 10 years have been growing after figures showed a 0.2% contraction in the country’s economy between April and June 2019. A weakening global economy and high levels of uncertainty mean the UK’s economic activity was already lagging, but the potential of a no-deal Brexit and the general uncertainty surrounding the UK’s departure from the EU, running down on stock built up before the original 29th March departure date, falling foreign investment and car plant shutdowns have resulted in its GDP decreasing by 0.2% in Q2. This is the first fall in quarterly GDP the country has seen in six and a half years and as the new deadline (31st October) approaches, economists are concerned that it could lead to a second successive quarter of negative growth – which is the dictionary definition of recession.

And whilst the implications of Brexit are mainly expected to be felt in the country itself, the whole Brexit process displays the risks that can come from economic and political fragmentation, illustrating what awaits in an increasingly fractured global economy, e.g. less efficient economic interactions, complicated cross-border financial flows and less resilience and agility. As Mohamed El-Erian explains: “in this context, costly self-insurance will come to replace some of the current system’s pooled-insurance mechanisms. And it will be much harder to maintain global norms and standards, let alone pursue international policy harmonisation and coordination”. Additionally, he goes on to note that tax and regulatory arbitrage are likely to become more common, whilst economy policymaking could become a tool for addressing national security concerns.

“Lastly, there will also be a change in how countries seek to structure their economies”, El-Erian continues. “In the past, Britain and other countries prided themselves as “small open economies” that could leverage their domestic advantages through shrewd and efficient links with Europe and the rest of the world. But now, being a large and relatively closed economy might start to seem more attractive. And for countries that do not have that option – such as smaller economies in east Asia – tightly knit regional blocs might provide a serviceable alternative.”