Are the Big Four Still ‘the Best’?

For years now the Big Four accounting firms have been known as the go-to organisations when it comes to accounting and auditing services. However, in recent times reports indicate the Big Four may not be the knights in shining armour that they are made out to be. 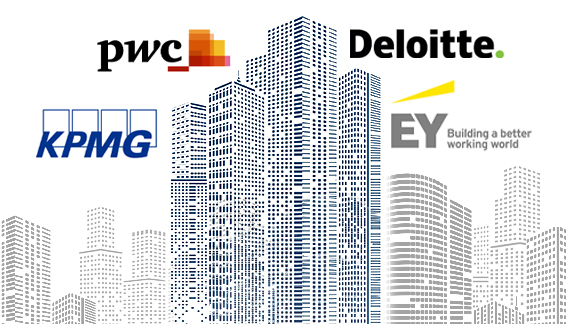 Nonetheless, last month high street retailer Sports Direct pleaded with the Big Four to take over their auditing process, which it said a smaller firm would not be able to handle. Sky News reported that the Shirebrook company, the firm heading up Sports Direct’s insolvency, approached Deloitte, EY, PwC and KPMG to ask them to take on one of the toughest jobs in the profession. But is it actually true that any of these Big Four firms would do a better and more thorough job than a smaller firm?

Following the demise of Carillion and BHS, the Competition and Markets Authority (CMA) recently entertained the possibility of the Big Four being split up, forcing them to work with smaller rivals. However, it instead recommended that government officials hold the Big Four accountable when it comes to the close relationship between their auditing divisions and more lucrative consulting services, in order to avoid a conflict of interest. It also stated that it is open to revisiting the prospect of a breakup in five years if the performance of these firms does not improve.

Splitting up the Big Four would certainly change the dynamic completely, and allow smaller firms to show their worth when it comes to larger Sports Direct level ordeals, but it would also create a much more competitive playing field for smaller firms, leaving large organisations without a go-to solution.

Another challenge the Big Four currently face is the rise in new technologies, especially on the back of digitisation and increased regulation. According to a survey from the Chartered Institute of Internal Auditors (IIA), just under 60% of auditing firms believed these factors to be significant problems ahead in 2019.

According to Christian Wolfe, a regular reporter on the Big Four firms, machine learning, artificial intelligence and blockchain accounting solutions are fair game for all smaller firms, and the way it currently works is that “if you want public financial statements that investors trust, you must use a Big Four accounting firm.” However, he points out that once you’ve eliminated the margin for human error, recording and verifying transactions will be equally as trustworthy regardless of which firm you approach for the job.

That sounds a lot like a level playing field when it comes to accounting and auditing performance.

This leads me to discuss why in fact it is not an actual level playing field in the auditing profession. Simply put, the spread of work when it comes to the larger Carillion or BHS situations is too much for a smaller company to handle. In this regard, Sports Direct are correct. The Big Four, individually, never mind put together, have the manpower and resources, on a global level, to confront the largest tasks.

The spread of work when it comes to the larger Carillion or BHS situations is too much for a smaller company to handle.

Economia reports that the amount of FTSE 100 clients on retainer between the Big Four has never been closer. In 2005, EY held the least, at 19 FTSE 100 clients, while PwC held the most at 41 FTSE 100 clients. In Q3 2019 the numbers are much closer. EY now holds the least at 22 FTSE clients, while PwC still holds the most at 27 FTSE clients. Clearly, the spread between the Big Four has become more even over the past 15 years, however 100% of FTSE 100 companies are now on the books of a Big Four auditing firm. In September, Steve Smith, research manager at Adviser Rankings Ltd told Bloomberg that “the Big Four have cornered the FTSE 100 market.” And he’s not wrong.

This is not yet the case with FTSE 250, but it’s not far off. According to the figures from Adviser Rankings, the Big Four currently control 95% of the FTSE 250 market in terms of number of clients, and 96% in terms of market capitalisation. The parity between the Big Four and all other auditing firms, based on the number of the UK’s largest companies that contract them, is worrying. The other two firms that control a small share of the auditing of FTSE 250 companies are BDO LLP and Grant Thornton LLP.

These numbers are the real figures on client retention, and should essentially serve as proof that the Big Four are in fact still the best, otherwise, surely the FTSE 100 or 250 would seek auditing services elsewhere?

How much they are paid

As the Big Four are by default considered the best, they of course also cost the most, and partners in these firms are earning figures you can only write on paper. Recent reports indicate Deloitte Partners are due their biggest payday in a decade; the average pay for 699 of Deloitte’s equity partners is $882,000 in 2019, moving up an average of $50,000 from last year.

In addition, Deloitte’s combined member firm revenue has risen a chunky 9.4% to $46.2 billion (£37.4 billion) since last year, and in 2018 this number had already grown 11.3% on the previous year. The growth is volatile, but it is significant growth for the company’s bottom line.

Based on the above, you would figure Deloitte, the largest of the Big Four, is charging its worth in gold, but are the companies that are paying these huge firms getting a fair deal in return?

In terms of quality standards, the Big Four auditing firms are assessed and regulated, often by each other, which in a market of fierce competition between them, is a fair and appropriate method of benchmarking standards. There aren’t rankings available per se, but each of the Big Four has its own strengths and weaknesses; EY, for example, is more Europe centred and therefore by default performs better for European based firms.

On the topic of performance quality, Gennaro Senatore, former Transaction Services AM at KPMG, said on a Quora forum: “…with IFRS and Generally Accepted Audit Standards I can tell you the differences are getting less and less noticeable.” He mentions PwC having an edge, or “at least perceived.” While he says that in terms of advisory, in Europe PwC has the most successful treasury practice, EY is stronger on internal audit and Risk Services, and Deloitte in implementation and IT projects. He concludes that KPMG is very good all-round and has a very strong tax practice. However, the performing results will be different for each client, for each auditing firm, so these opinions are after all highly subjective.

More recently, the UK Financial Reporting Council issued a serious warning about the quality of audits of financial statements in the UK. The watchdog stated that the Big Four have YoY failed to meet the benchmark 90% target of large company audits requiring no more than limited improvements. In 2019, of all auditing firms, 75% of audits reached that level of quality. The consequence was £32 million ($39.5 million) in fines (see above for Deloitte’s bottom line and then think about how this could possibly disincentivize poor performance).

Sir Winfried Bischoff, the outgoing chairman of the FRC, said in the watchdog’s report: “We are not seeing more immediate improvements from the [audit] firms and there is undesirable inconsistency across the market.”

The Big Four have YoY failed to meet the benchmark 90% target of large company audits requiring no more than limited improvements. In 2019, of all auditing firms, 75% of audits reached that level of quality.

Despite not improving their performance, the Big Four are set to maintain the top tier stranglehold in the auditing sector, which is strange because a study by Source Global Research found that although over two-thirds (68%) of audit clients still rank a Big Four firm as their go-to external auditor, over half (58%) do not name their current auditor as their first choice.

In the US, there are reports of the Big Four bungling 31% of their most recent audits, as analysed by the Public Company Accounting Oversight Board (PCAOB). The data shows that in 2019, Deloitte bungled 20% of audits examined, PwC bungled 23.6%, EY bungled 27.3%, and KPMG bungled 50%. For what is expected of the Big Four, falling short of near-perfect is a bad image, so missing the mark on 31% of audits could be considered poor performance for the top firms; firms which are paid and are growing as if they were truly the best of the best.

According to The Independent, Stephen Haddrill, the FRC’s chief executive, said: “At a time when the future of the audit sector is under the microscope, the latest audit quality results are not acceptable.

“Audit firms must identify the causes of their audit shortcomings and take rapid and appropriate action to improve quality. Our latest results suggest that they have failed to achieve this in recent years.”

So are the audits that were surveyed by both the UK and US watchdogs actually botched or bungled, or are the firms simply not as good as everyone thinks they are? Are the Big Four really still the best?

Based on what we’ve looked at, it is apparent that action should be taken, and further regulation implemented, while large companies should start considering the auditing and accounting services of smaller consultancy firms and perhaps then the status quo on the Big Four will change. What are your thoughts?