January must be the most difficult month of the year in the western world. The Christmas festivities are over, all decorations (and the joy they bring) are gone and we’re all back to our daily routines which for most people consist of waking up when it’s still dark to go to work. January can feel like a very long, bleak month, which is why coping mechanisms are needed. Booking a short holiday or a weekend city break might be an unusual decision for this time of the year but it’s definitely one way to not let the January blues get us down. It would be a great way to kick start the new year and it would provide us with something to look forward to. 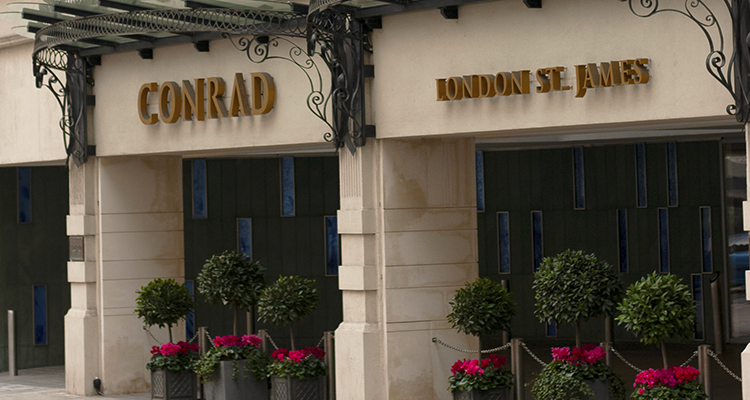 London is just as beautiful in the winter, as it is in any other season and all 30 million tourists that flock to the UK’s capital every year will probably agree that it is one of those cities which offer something for everyone. Pack a warm coat and an umbrella and book your trip to this ever-changing metropolis which promises to make you fall in love with its beautiful, bustling streets – even in January!

London is one of the most visited cities in the world and as such, its hospitality industry is brimming with everything from small boutique stays to a myriad of luxury hotels. So when we think of where to stay in London, it’s safe to say we’d want something unique – something that you’d be hard pushed to find in any of the other hundreds of options. With its ridiculously convenient location –  directly opposite St James’ Park tube station, less than a 10-minute stroll from the Houses of Parliament, and a short walk to Trafalgar Square – choosing to stay at Conrad London St James is definitely a decision you won’t regret. A luxury brand of the Hilton chain, with hotels in 35 different cities across the world, Conrad Hotels provide their guests with everything they could possibly desire. The rooms and suites at Conrad London St James are just what you’d expect of a five-star luxury hotel: big King-sized beds, comfortable living areas and spacious brown-marble bathrooms. If you stay at one of the executive rooms, a suite or if you’re a Diamond Tier Hilton Honours member, you’ll be granted access to Conrad London St James’ executive lounge where you can enjoy complimentary drinks during the day, as well as a private breakfast buffet, afternoon treats, afternoon tea, as well as evening canapés and alcoholic drinks. Soak up tranquil vibes, whilst sipping a coffee or stop by for a quick aperitivo before dashing to dinner.

London is one of the most exciting and diverse restaurant capitals in the world and Conrad London St James’ ideal locations means that you’ll be in close proximity to an impressive array of exceptional restaurants and bars. However, make sure you leave time for a meal at Blue Boar Restaurant in the hotel, too. It focusses predominantly on staples like steaks and burgers, but there’s plenty of other options too like a selection of seafood dishes (the pan-roasted halibut with Jerusalem artichoke, toasted hazelnut, truffle, herb crust, baby leeks, wild mushrooms & red wine jus is to die for), as well as a selection of fresh salads. And after dinner, pop into Blue Boar Bar for a politically-themed cocktail; how about a gin-based ‘Corbyn’s Reign’ or a ‘Theresa’s Kitten Heels’ which comes with vodka, blue curaçao, lime, sugar syrup and prosecco?

Breakfast is served at Blue Boar Restaurant too – it comprises an extensive continental buffet which offers all the classics, as well as an à la carte menu. For another taste of British culture, head to Emmeline’s Lounge (named after British political activist Emmeline Pankhurst), where you can indulge in a quintessentially British afternoon tea or a Champagne brunch.

For more information and to book your stay, please go to www.conradhotels.com/london

7 Ways to Prepare Your Portfolio for a Recession