To Prevent the Next Pandemic, Shut Down Slaughterhouses (& Invest in Companies that Make Plant-Based Meat?)

In an interesting move to try to influence slaughterhouses’ decision to switch to packing plant-based meat substitutes only, the animal activist organisation PETA (People for the Ethical Treatment of Animals) has announced that it’s purchased shares at a number of meatpackers in the US and Canada, including companies like Tyson Foods, Smithfield Foods, and Maple Leaf Foods. 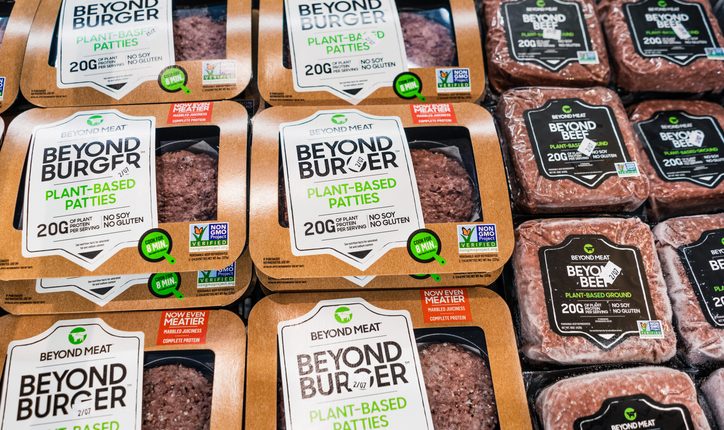 In a press release, the organisation has shared its plans to “attend annual meetings, correspond with other shareholders under Securities and Exchange Commission rules, and directly urge CEOs to convert all slaughterhouses to produce and pack only vegan meats”. Tyson Foods, the world’s largest meatpacker, has entered the alternative meat sector already – it launched its Raised & Rooted product range at the end of last year.

PETA has connected the recent move to the current COVID-19 pandemic, saying that another pandemic is inevitable if our society fails to learn from this one. “This crisis has shown that raising and killing animals in filthy factory farm conditions and butchering them in ill-regulated slaughterhouses creates breeding grounds for infectious diseases”, says Ingrid Newkirk, PETA’s President. “PETA is pushing major meat companies to shut down the slaughter lines and switch to plant-based meats that never cause a pandemic.”

PETA says that many meatpacking companies have already increased their production of plant-based meat during this time. The organisation hopes that their recent move will help complete this transition.

The Pandemic’s Impact on the Meat Industry

A study conducted by The Vegan Society has found that one in five (20%) of Britons are reducing their meat intake, while another study points out that nearly one-quarter of all Americans (23%) are eating more plant-based foods now, during the current COVID-19 crisis. As a result, more and more people have been buying plant-based meats like Beyond Meat and Impossible Foods in the past few months. Meanwhile, meat plants in the US are shutting down as hundreds of their employees get infected with coronavirus, causing meat shortages which are driving the price on animal protein up. Tyson Foods, one of the companies that PETA has bought shares in and one of the world’s largest meat processors, was forced to suspend operations at its Columbus Junction, Iowa, pork plant in April after more than two dozen workers contracted COVID-19 there.

Although the novel coronavirus originated in a Chinese ‘wet market’, which is obviously very different from slaughterhouses in the Western world, diseases like Swine flu began on a US factory floor, while other deadly influenza viruses have been traced to chickens. The Centers for Disease Control and Prevention has warned that approximately 75% of recently emerged infectious diseases affecting humans originated in other animals such as pigs and chickens.

What PETA hopes is that by becoming an activist stockholder, the organisation can influence meat processors to transition to plant-based alternatives, which could have a great impact not only on people’s health but also on our planet, and could prevent a potential new pandemic in the future.

Should I Invest in Companies that Make Plant-Based Meat?

Vegan meats produced by companies like Beyond Meat and Impossible Foods were surging even before the pandemic. The super successful stock market debut of Beyond Meat on the US NASDAQ market exactly a year ago has attracted growing awareness of plant-based meat companies amongst investors. Known for its famous Beyond Burger, which very successfully mimics a ground beef burger but is made of pea protein, the company was (at one point) one of 2019’s most impressive stock market success stories. Its $25 IPO offer price initially jumped by a remarkable 163% to $65.75 and then topped $250 in July 2019.

The global plant-based meat market is expected to grow to $27.9 billion by 2025, a compound annual growth rate of 15%. Barclays has estimated that global sales of meat substitutes could grow from 1% of the total market for meat to 10% over the next decade. And whilst in the past, a lot of companies have focused on vegetarian and vegan markets, the increased dialogue about the health benefits of consuming less meat and the negative impact animal farming has on the climate has influenced more people to turn to a ‘flexitarian’ diet – or regularly opting for meatless alternatives without giving up meat completely. 32% of Americans identify as flexitarians today and companies across the world are responding to the trend. Even fast-food companies like KFC and Burger King have now launched plant-based alternatives of their signature chicken and beef burgers.

The current coronavirus pandemic seems to have added to the surge in going fully or partially meat-free, however, like with all hot trends, it is worth considering the risks if you want to get involved as an investor. The appetite for meat alternatives is extremely strong right now, but could slow down in the future. However, the fact that massive meat processors like Tyson Foods are responding to the trend by launching their own meatless products can give confidence to investors that the plant-based revolution is likely here to stay.