Bitcoin: A Golden Opportunity for Investors?

Over the years, Bitcoin has had its fair share of ups and downs. Hailed by some as ‘digital gold’, it continues to grow in popularity and is considered the top cryptocurrency in the world. But as the stock market remains unpredictable, what can investors do to take advantage of Bitcoin’s highs and lows and how is it best incorporated into a diversified investment portfolio? 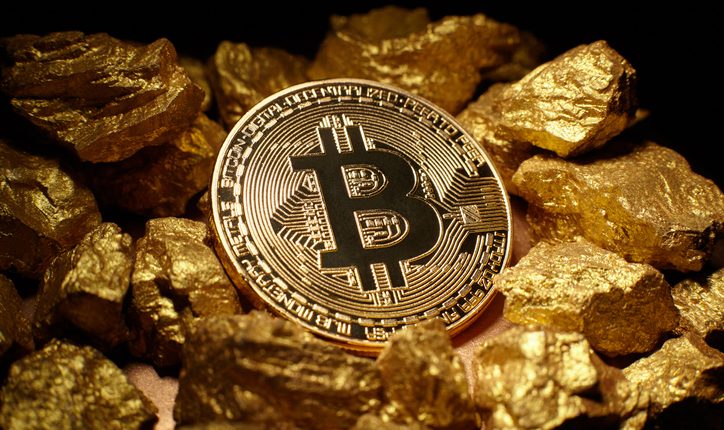 Launched in 2009, Bitcoin signalled the start of the cryptocurrency movement. Despite there still being plenty of mystery surrounding its creation, Bitcoin mania shows no signs of slowing down.

On its way to becoming a global currency, more merchants are beginning to accept Bitcoin as a legitimate payment form, and some cities around the world even have dedicated ATMs for the cryptocurrency. Some of the first tangible items ever purchased with Bitcoin were two large pizzas in 2010, the value of which today would be worth more than $190 million. Although it continues to attract scepticism from the world’s central banks and many institutional investors, cryptocurrencies don’t deter the savvy capitalist.

As an investor, it is important to create a diverse portfolio that contains both safer and riskier investments. Ideally, it should include a mixture of stocks, fixed income, and commodities, such as gold. Although adding cryptocurrencies to a portfolio is perhaps considered risky, having a good spread of investments avoids creating an unnecessary threat to your capital and protects your assets against economic turbulence. Smart investors should work towards building a complementary and well-balanced portfolio and, in the modern market, this often includes cryptocurrencies.

Over the past year or so, the perception of Bitcoin has slowly begun to change. Initially, it was misunderstood by people and labelled as untrustworthy and vulnerable to extreme short-term fluctuations in value. However, as household names such as John Lewis and Tesco continue to endorse Bitcoin and even accept it as a legitimate currency, attitudes are beginning to shift. Whilst there is still a long way to go in terms of regulation for Bitcoin, the reputational troubles it once faced have started to recede.

It is important that those looking to safely incorporate both gold and crypto into their portfolios use regulated providers.

Despite this, investors should still tread with caution when investing in cryptocurrency. As a relatively new currency, there is a lack of historical data and analysis that can be used to predict long-term performance. Unlike fiat currencies, such as the British pound, Bitcoin has a maximum supply of approximately 21 million coins. This has led some to believe that the scarce asset will continue to increase in value as government-issued currencies decrease. Others believe it could eventually become the first truly global currency. However, due to its unpredictability, investors should avoid ‘putting all of their eggs in one basket’ and consider adding other valuable commodities to their investment portfolios, such as gold.

While they are both finite resources, Bitcoin and gold play very different roles within an investment portfolio. Many people choose to invest in cryptocurrency for capital appreciation and because its volatility often leads it to being viewed as a quick way to make money. Gold, however, is often associated with longevity and is seen as a tool of wealth preservation. With a track record of thousands of years, the precious metal still carries importance in today’s society. Although its price has varied, it has remained consistent and increased by an average of 49% over the past five years, making it a safe addition for any investment portfolio.

Ultimately, gold and Bitcoin go hand in hand. Historically, when Bitcoin has crashed, gold has rallied and vice versa. The two assets can be very complementary and investing in both could help towards building a portfolio that benefits from both long and short-term profits, providing it is done safely.

It is important that those looking to safely incorporate both gold and crypto into their portfolios use regulated providers. Ideally, the company should also have a proven track record with other investors; this is particularly important for cryptocurrencies, where the landscape is still unfamiliar. Whilst newer cryptocurrencies, such as Dogecoin, can seem attractive to investors, their relative newness to the marketplace means that investors should proceed with caution, especially until more is known about their vulnerability to fluctuations.

By investing in both gold and Bitcoin, investors can also lower the risk of their portfolio and ensure that not all of their capital is tied into a high-risk investment, such as Bitcoin. By periodically converting some cryptocurrency into a more stable asset, such as gold, investors can potentially shield themselves from some of the currency fluctuations they may be exposed to if their investment portfolio was fully focussed on Bitcoin.

First time investors should do plenty of research beforehand and possibly even seek the advice of a professional adviser, to ensure they are being smart with their investments.

Whilst it is likely that Bitcoin is here to stay and will continue to gain popularity, investors should still tread with caution. Until a more concrete regulatory system is put in place, cryptocurrency will remain volatile. Smart investors should ensure their portfolios are well-balanced with other investments, such as gold or other precious metals, to protect their overall worth and create a safe haven for the future.

Founded in 2018, Minted is a technology platform where anyone can buy, sell, save and transfer physical gold. With an easy-to-use mobile platform and app, Minted makes buying gold simple, safe and affordable. Customers can set up flexible savings plans and invest amounts of their choice into gold each month. With market-leading buying rates, Minted is the only gold savings app where users can get ownership and delivery of pure 999.9 24kt LBMA physical gold.

Minted’s users aren’t tied into a contract and can sell their gold instantly, at any point, at better rates than on the High Street. Regulated by the Financial Conduct Authority, users’ gold is safely stored in a high-security UK London vault and is fully-insured to market value.

Visit the Minted website to find out more about buying and saving in gold: https://theminted.com/