3 UK Funds That Could Help To Hedge Against Inflation

Shane Neagle, Editor In Chief at The Tokenist, takes a look at 3 UK funds that could help to hedge against spiralling inflation. 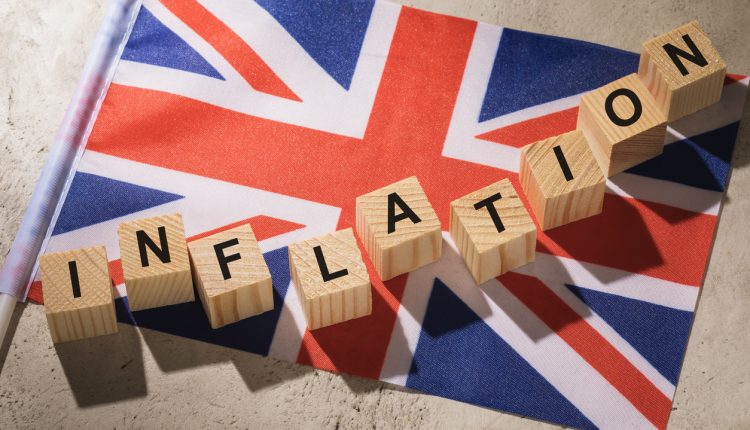 When the Federal Reserve made the unprecedented move in March 2020 to pump trillions into the economy, it was a global milestone. Because USD is the world’s reserve currency, the Fed is effectively the world’s central bank, overshadowing all others.

With such a drastic increase in circulating supply, the USD lost value, coupled with low-interest rates which resulted in cheap access to borrowing, we saw a worldwide inflation spiral. The UK closely follows the US inflation rate, as both have reached 40-year highs.

The UK Economic Woes A Mirror Of The US

While the US inflation reached 8.6% in May, UK inflation outpaced it even further, at 9% in April, the highest of the G7 nations. The cost of fueling up a family car in the UK is now £100.27, according to Experian Catalist’s database.

Compared to the US, this means that a gallon of gas in the UK is equivalent to ~$8.8, which is 76% higher than the US gas price national average of $5. This has had such a huge impact on the cost of living that one in four people have resorted to skipping meals, according to a Sky News survey.

Unfortunately, the hikes themselves, as a remedy to inflation, are decimating stocks and cryptos alike. Blue-chip representatives for Europe and the US are both down by over -20% year to date. On the upside, London’s “Footsie” index (FTSE 100) has been outperforming them. 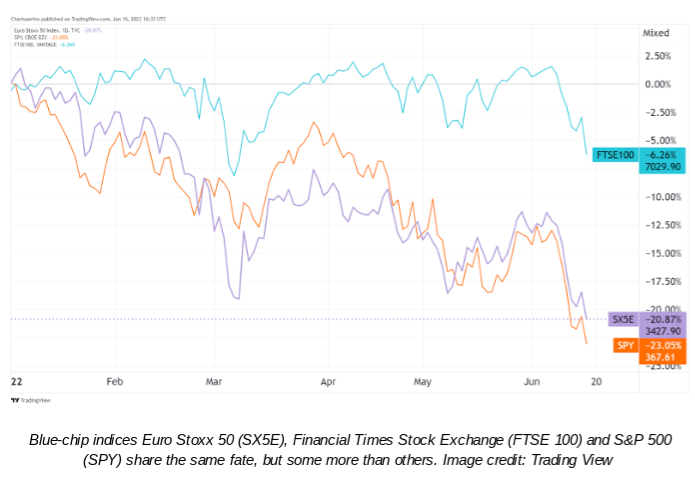 Unquestionably, these are withdrawal symptoms of a market habituated to cheap, near-zero interest rate capital. Furthermore, the housing market is getting hit, as higher interest rates on mortgages are anticipated to price millions of individuals out of home ownership.

In other words, a remedy for inflation can trigger a recession—a period of declining output and hiring freezes as companies consolidate their capital under new conditions.

Funds To Escape The Inflation Vice

While this economic cycle seems particularly harsh, they come and go as they always do. For this reason, one must adopt a long-term outlook. An outlook, so to speak, that aims for a 5-year investment gain. More importantly, it is crucial to consider assets that are in demand regardless of either inflation or a recession.

In the UK, open-ended investment company (OEIC) funds are equivalent to open-ended mutual funds in the US. They are priced once per day, diversifying investor money across a wide range of assets. For this reason, they are considered a long-term investment, of up to 10 years, spreading the risk widely so the growth outweighs the potential of losing the principal.

Because OEIC funds are professionally managed and diversified, their maintenance is relatively higher. The funds are generally available through many of the leading apps for trading stocks in the UK. They typically charge an annual management charge (AMC) between 1% to 1.5% of the allocated shares’ value. Here are three OEIC fund candidates for your consideration.

By 2030, the UK will no longer allow for new gas-operated vehicles to be sold on the market. This speaks volumes about the relentless regulatory green push. Moreover, energy investments have been a historical safe haven against inflation.

In the near future, the UK government announced that it will phase out Russian oil imports as a result of the Ukraine-Russia conflict. This will be as early as the end of 2022. Both the intermediate geopolitics and long-term legislation translate to a mass adoption of renewable energy.

At $459.26 million and targeting 4.5% annual income, VT Gravis counts on that future by diversifying investor money on smart grids, energy efficiency, storage and other zero-emission alternatives. The fund charges 0.81% AMC.

Although launched in September 2021, it is based on the time-tested Ruffer Investment Strategy. Having received a “cautious balanced” rating, LF Ruffer is on the lower end of the risk spectrum. Its portfolio diversification is focused on times of market distress.

Specifically, high inflation is currently plaguing the world. LF Ruffer ties precious metals, energy stocks and index-linked bonds in a capital-protection bubble that are least likely to lose money on an annual basis. At a size of $751.29 which targets above 4% annual income, RL Ruffer charges 0.93% AMC.

Infrastructure goes hand-in-hand with energy stocks, precious metals and renewables as guardians against inflation. Although high inflation impedes new infrastructure projects, all governments are aware that the cost of not building and maintaining roads and civic and utility buildings is higher in the long run if left behind.

That is why M&G Global covers infrastructural assets that are critical for any nation – social and economic. Furthermore, the fund counts on the growth of emerging markets – smart gridding the cities, data centres and communication towers. However, its portfolio does include a tighter range of investments, so a drop in one could significantly impact the fund’s value.At $634.96 million size and targeting 3% – 4% annual income, M&G Global charges 0.70% AMC.

Taking Advantage Of The Davos Agenda

In prior decades, it was more difficult to pick the right fund. One had to choose between an actively managed or a passively managed (index) fund. The latter typically have lower annual fees but are less likely to take advantage of changing market conditions. A strong case could be made that actively managed funds are also superior to life insurance policies, in terms of financial protection.

There is also the credit rating and default risk to consider. While all of these metrics still stand, the concentration of economic power has grown to the point where one metric is more important than others. Does the fund cater to the Davos Agenda?

Whether it is the World Economic Forum, UN’s 2030 Agenda or the World Government Summit, they all tie every economic act worth of note in a unified front. Furthermore, they deploy ESG framework – environmental, social, governance – to rate them above the immediate profit-return considerations.

This creates a streamlined investment outlook in which emerging infrastructure, renewables, digitisation and smart grids take priority regardless of market upheavals. From this perspective, the three listed funds pose the least risk in these uncertain times.

What The Cryptocurrency Crash Can Teach Investors About Risk Management