Put Your Money on the Road: Why Drones Aren’t the Future After All

Everyone’s been saying for quite a while now that drones are going to take over, the technology will be used for flying cars and we’ll be delivering almost everything via drone, but is that really the case or are we too excited to see the obstacles ahead? William Sachiti, The Academy of Robotics explains to […] 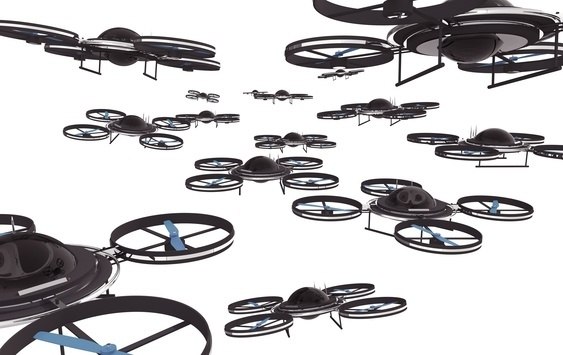 Everyone’s been saying for quite a while now that drones are going to take over, the technology will be used for flying cars and we’ll be delivering almost everything via drone, but is that really the case or are we too excited to see the obstacles ahead? William Sachiti, The Academy of Robotics explains to Finance Monthly that there is a more realistic perspective.

Drones are the future of home delivery! Or at least that is what I used to believe. They appear to be an efficient means of transporting items from one location to another. My mind ran wild, picturing a drone superhighway! I was keen to establish a dedicated airspace for drones to self-navigate, and to deliver packages to customers.

But… and there is a big but. Such a big one, I no longer believe drones are the future. The issue is not technical – it is social.

The more I researched, I began to realise the safety defects of a cluttered airspace, peppered with flying machines, often controlled by amateur operators. Not to mention the cost of achieving this drone superhighway in the sky.

These issues have already been encountered by Amazon, which is currently leading the way with drone delivery. For example, the retail giant must house drones near to population centres in order to be more efficient than road-based delivery.

Now imagine your neighbour’s daily impulse-buys being delivered by a very loud drone, the novelty would fade fast. Imagine the sound of a washing machine spinner at full-belt during unpredictable hours of the day, waking up your kids and spooking your spaniel. Take it a step further and imagine living near a big retailer’s drone delivery centre. The noise and intrusion could be worse than living under the Heathrow flight path.

I had initially overlooked our roads – thinking of them as ‘the past’ and drones as ‘the future’ – but I no longer believe that to be the case. Ultimately, road-based delivery using driverless vehicles is far safer, quieter and more cost effective than the seemingly futuristic, yet comparably less-practical drone courier services.  It is easy to forget that we haven’t fully tapped the potential of our road networks – public, unmarked and residential. And autonomous vehicles present the opportunity to tap into and make better use of the infrastructure we already have.

So what form will deliveries of the future take?

Italy’s Piaggio Fast Forward – a subsidiary of Vespa manufacturers, Piaggio – has invented a cylindrical luggage compartment capable of tailing its owner by a few metres, while holding up to 18km of cargo.  This clearly shows the value of wheels on the road.

Mole Solutions is ignoring both road and air for something completely different: below-ground freight capsules. Thrown into the delivery mix, such an invention could help to reduce road (and air) traffic congestion, as well as keeping out of sight.

Pelipod on the other hand, is seeking to cater specifically to businesses that need efficient, secure and direct delivery. Bypassing post offices, courier firms and depots, the firm is pioneering delivery pods that will travel straight to the destination. Integrated electronic systems will grant access to only authorised users, and provide proof of delivery.

And Kar-Go, the driverless delivery vehicle from my own Academy of Robotics, will autonomously navigate unmarked roads such as residential areas, and use an intelligent package management system to deliver packages to retail customers, day or night.

So, road vehicles will still be the primary force for delivering packages but they’ll come in all shapes and sizes.

Delivery beyond the physical

Looking beyond the first incarnations of autonomous vehicles and towards the far-future of delivery, I believe product delivery will be digital. Driverless vehicles, and smart devices in general, will benefit from 5G mobile technology. With so many devices feeding data into the Internet of Things (IoT), devices are able to communicate and act in unison.  Autonomous vehicles for instance, will be able to communicate with one another, and other road users.

Let’s put digital delivery into context. 25 years ago, the only way to send a document to someone was to have it physically delivered. With a little help from technology, the same document could, just a few years later, be sent via fax; scattered into bits of information, sent across the world and re-assembled in a matter of minutes.

As technology improved, sending a document moved from minutes, to seconds to an instant. So, if delivery of physical goods continues to incrementally improve over time, it’s not unrealistic to imagine that your latest smartphone could one day not be physically sent to you at all.

Instead, it could be purchased via a digital download and, through some 3D printer/fax machine-hybrid, be re-assembled in your living room. Of course, we can’t expect to see such an invention anytime soon. Technological advancements – despite accelerations in the digital age – are gradual.

With giants like Google, Tesla and Uber counted among the early adopters of self-driving cars, you can bet that the overwhelming majority of future vehicles, whether transporting people or packages, will be driverless.

When consumers are ordering compost from the garden centre, supermarket groceries or pretty much anything from the online superstores, you can bet that, regardless off the type of delivery vehicle, the driver will be digital.