Banks’ Revenue Growth at Risk, But Why?

New entrants to the banking market — including challenger banks, non-bank payments institutions, and big tech companies — are amassing up to one-third of new revenue, which is challenging the competitiveness of traditional banks, according to new research from Accenture (NYSE: ACN). Accenture analysed more than 20,000 banking and payments institutions across seven markets to […]

New entrants to the banking market — including challenger banks, non-bank payments institutions, and big tech companies — are amassing up to one-third of new revenue, which is challenging the competitiveness of traditional banks, according to new research from Accenture (NYSE: ACN).

Accenture analysed more than 20,000 banking and payments institutions across seven markets to quantify the level of change and disruption in the global banking industry. The study found that the number of banking and payments institutions decreased by nearly 20% over a 12-year period – from 24,000 in 2005 to less than 19,300 in 2017. However, nearly one in six (17%) of current participants are what Accenture considers new entrants — i.e., they entered the market after 2005. While few of these new players have raised alarm bells among traditional banks, the threat of reduced future revenue growth opportunities is real and growing.

In the UK, where open banking regulation is aimed at increasing competition in financial services, 63% of banking and payments players are new entrants – eclipsing other markets and the global average. However these new entrants have only captured 14% of total banking revenues (at £24bn), with the majority going to non-bank payments institutions. The report suggests incumbent banks will likely start to see a significant impact on revenues as leading challenger banks are surpassing the 1 million customer threshold and 15 fintechs have been granted full banking licenses.

“Ten years after the financial crisis, the banking industry is experiencing a level of competitive intensity and disruption that’s much greater than what’s been seen before,” said Julian Skan, senior managing director for Banking and Capital Markets, Accenture Strategy. “With challenger banks and platform players reducing traditional banks’ competitiveness and the threat of a power shift looming, incumbent players can no longer rest on their laurels. Banks are mobilizing to take advantage of industry changes, leveraging digital technologies and ecosystem business models to cement their relevance with customers and regain revenue growth.”

In Europe (including the UK), 20% of the banking and payments institutions are new entrants and have captured nearly 7% of total banking revenue — and one-third (33%) of all new revenue since 2005 at €54B. In the US, 19% of financial institutions are new entrants and they have captured 3.5% of total banking and payments revenues. 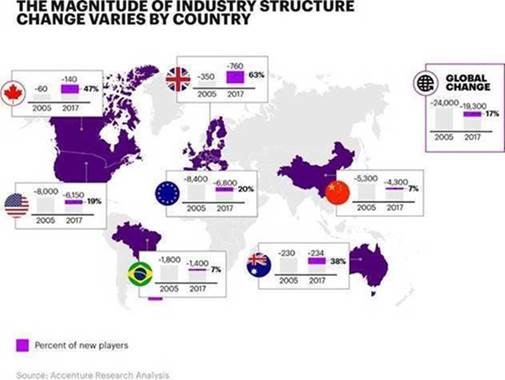 Over the past dozen years, the number of financial institutions in the US has decreased by nearly one-quarter, largely due to the financial crisis and subsequent regulatory hurdles imposed to obtain a banking license. These factors have made the US a difficult market for new entrants and a stable environment for incumbents. More than half of new current accounts opened in the US have been captured by three large banks that are making material investments in digital, while regional banks focus on cost reduction and struggle to grow their balance sheets.

The research appears in two new reports: “Beyond North Star Gazing,” which discusses how industry change is shaping the strategic priorities for banks, and “Star Shifting: Rapid Evolution Required,” which shares what banks can do to take advantage of changes.

“Most banks are struggling to find the right mix of investments in traditional and digital capabilities as they balance meeting the needs of digital customers with maintaining legacy systems that protect customer data,” said Alan McIntyre, head of Accenture’s global Banking practice. “Banks can’t simply digitally enable their business as usual and expect to be successful. So far, the conservative approach to digital investment has hindered banks’ ability to build new sources of growth, which is crucial to escaping the tightening squeeze of competition from digital attackers and deteriorating returns.”

“As the banking industry experiences radical change, driven by regulation, new entrants and demanding consumers, banks will need to reassess their assets, strengths and capabilities to determine if they are taking their business in the right direction,” McIntyre said. “The future belongs to banks that can build new sources of growth, including finding opportunities beyond traditional financial services. They can’t afford to blindly follow the path they originally set out at the beginning of their digital journey. However, as the report clearly shows, there is no single answer and each bank needs to truly understand the market it is operating in before charting a path forward.” 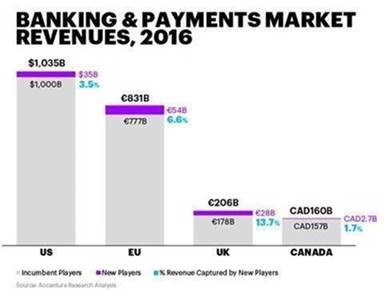