Shane Neagle, Editor In Chief at The Tokenist, explains why JPMorgan is the first major bank to join the metaverse. 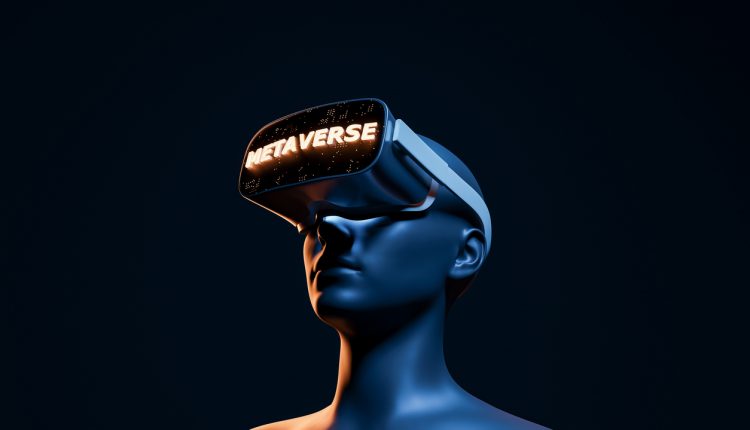 Cryptocurrency has become somewhat inevitable in our world today. From being a relatively obscure proof of concept announced in 2008, it has become part and parcel of the global financial fabric.

Initially used by individuals to make purchases—such as the 10,000 BTC spent on a pizza—the industry continues to evolve and find use cases in almost every sector of the global economy. This evolution has led to its adoption by multinational corporations, who continue to find interesting uses for these digital assets.

The evolution in the crypto industry has led to the development of Decentralised Finance (DeFi), Non-fungible tokens (NFTs), Game-Fi and more recently, the Metaverse. Consequently, institutional adoption has continued apace.

Global Fintech giants PayPal and MasterCard are looking to integrate crypto payments into their list of products. Electric car company Tesla and Software giant Microstrategy purchased Bitcoin and hold it on their balance sheet, as seen in their recently released Q4 reports. Adidas and Nike have announced NFT collections with their sights on the virtual world, while Microsoft has ventured into the Metaverse through its acquisition of Activision Blizzard.

Conspicuously, the banking industry has also wanted a piece of the action as institutional adoption rallies. Initially, the consensus was that it would be adversely affected by the emergence of crypto. However, both industries seem to be coexisting just fine.

Several banks globally have announced their intentions to integrate crypto services into their offerings. This would allow their customers to easily access the best of both worlds on one platform.

However, the stakes have been raised even higher, as Wall Street banking giants JP Morgan recently announced joining the Metaverse. The move represents the first major bank to venture into this space.

JP Morgan’s Approach To The Metaverse

JP Morgan has opened a lounge in the blockchain-based Decentraland. The US bank believes its Metaverse branch will enable customers to create virtual avatars, establish virtual rooms, and travel in the ‘Onyx Lounge’—named after its suite of Ethereum-based services.

The Wall Street behemoth plans to take advantage of prospective growth opportunities in the metaverse through its virtual presence. With the entire world at a critical crossroad, it believes that there isn’t a single company or celebrity that is not considering or building an identity on the Metaverse. JP Morgan’s report said,

“The metaverse will likely infiltrate every sector in some way in the coming years, with the market opportunity estimated at over $1 trillion in yearly revenue. As a result, we see companies of all shapes and sizes entering the metaverse in different ways, including household names like Walmart, Nike, Gap, Verizon, Hulu, PWC, Adidas, Atari, and others.”

In its approach to the Metaverse, JP Morgan believes that if the digital world is to succeed, having a robust and flexible financial structure is critical. With this in focus, its strategy will ensure interoperability grows due to its payment and financial architecture. This infrastructure will ensure users can seamlessly interact between the physical and virtual worlds.

However, the bank issued a warning about the difficulty of building a corporate strategy in a dynamic environment as metaverse components evolve quickly. Despite this, it believes the cost and risks of engaging early and regularly to build intellectual property, develop a hypothesis and identify partners are minimal. It further buttressed that the high risk of being left behind justifies the small initial expenditure required to get started and explore this new digital terrain. It said,

“However, the costs and risks of engaging early and consistently in order to build internal intellectual property, develop hypotheses about future business models, and identify ecosystem partners and collaborators are relatively low.”

Opportunities In The Metaverse: What JP Morgan Sees

According to JP Morgan, the opportunities present in the Metaverse are limitless for both individuals and corporate brands alike. These available opportunities within the economy of the Metaverse—Metanomics—cut across virtually every market area with an estimated value of $1 trillion.

The dynamics of supply and demand are expected to push more people into the Metaverse and necessitate the development of new avenues to generate revenue. The creator economy will present enormous opportunities for its participants to develop products consumed in the digital world. Together with marketing and advertising, the service sector also offers another considerable segment within the Meta-economy.

Consequently, it is estimated that by 2027, spending in the virtual world’s advertising market will reach $18.41 billion due to branding and immersive ad experiences. This potential also spreads to the service industry as a recent fortnight virtual concert grossed $20 million, including sales and merchandise. The event was seen by 45 million people as geographical and cost impediments were removed. This provides a glimpse of the potential of the metaverse.

As the augmented technology behind the Metaverse continues to grow, commercial activities will most likely occur. Consumers will purchase goods, and workers will earn money by working in the virtual world. Reports estimate that $54 billion is already spent yearly on virtual goods, with NFTs having a market capitalisation of $41 billion. This number more than doubles the total amount spent purchasing music.

Moreover, the Metaverse evolved from online gaming, especially multiplayer online games, which have developed their economies for a while now. The evolution of these games can give a picture of the potential in this digital world. Roblox, an established online gaming platform for developers to create games for immersive 3D experience, carries 60 billion messages per day. This far outpaces the number of texts handled by leading phone companies and shows that more people are interested in the virtual world.

The growth of the play-to-earn model in the virtual world has made it more appealing by incentivising the process for users. These remunerations earned can then be invested into an in-game asset, bringing about potential income and expenses such as rent, tax maintenance and repairs. This sentiment is backed up by the reported GDP of Second Life, one of the earliest metaverse games that reached $650 million in 2021.

The potential for projects in the Metaverse is enormous. This has led to the social media platform Facebook rebranding to Meta, seeing the company focus its efforts on the immersive virtual experience.

Mark Zuckerberg, Meta’s CEO, reiterated that one company would not build the metaverse. Rather a collective effort of developers and institutions would make the whole experience a reality. In the wake of this announcement, several metaverse tokens on the blockchain, including Decentraland and Sandbox, saw a surge in market capitalisation.

From the chart below, SAND has held the largest slice of the pie among the big players, while MANA and CUBE have taken second and third place respectively. The spike followed the announcement of this development in November last year which pushed the valuation of all three above $17 billion. 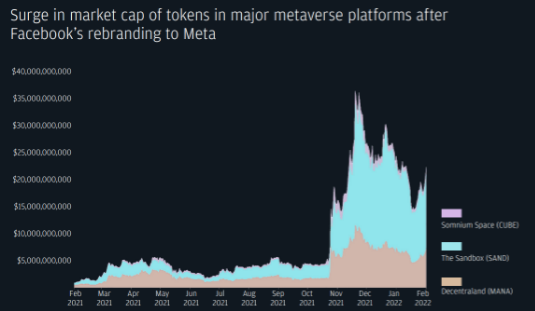 With this enormous potential available, banking institutions must get in early and take full advantage of them. A recent survey from Credit Donkey revealed that customers are willing to open new accounts if given a bonus. Through airdrops, we’ve seen a similar trend in the Metaverse. Such an incentive could be just what’s needed for prospective users to jump into the Metaverse and see what it’s all about.