An Interview with Elaine Stewart 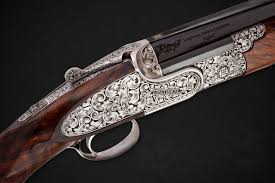 Elaine Stewart is co-founder and Marketing Director of Longthorne Gunmakers – a wholly English shotgun manufacturing company based in Northampton. Elaine’s work includes managing the marketing needs of the company and dealing with administrative issues. Here she talks to Finance Monthly about the company’s biggest achievements and plans for the future.

What were some of the Longthorne Gunmakers’ major achievements in 2015?
Our biggest achievement in 2015 was moving factory 160 miles, which commenced in October. We bought the factory in March 2015 but choosing the right time to abandon our small cramped workshop in Lancashire and take the plunge to Northampton was difficult. Although we had a basic plan, we weren’t exactly sure how everything was going to materialise, so we just had to go with the flow once the move started. The main reason why we chose to move to Northampton was the fact that we wanted to be more centrally located for our clients and staff. What is more, we believe that Northampton is a hub when it comes to attracting staff with technical skills such as CNC Programming and we managed to find an ideal building for our new factory there as well.
What was Longthorne Gunmakers’ beginning and how did it develop into the company that it is today?
Longthorne started as a subsidiary of our sub contract engineering company initially. In 2006 Managing Director James Stewart decided that after 30 years in the business, he was disillusioned with sub-contract machining and wanted the challenge of making his own product. After a conversation with a friend, a seed was planted and using his toolmaking know-how, he set about designing the now renowned ‘Longthorne’ barrels. What differentiates them form other barrels is the fact that they are fully machined from a single piece of steel. Several scrapped barrels later, the process was perfected and our shotguns were launched at The CLA Game Fair in 2010, just after Longthorne was registered as a separate company. Our barrels offer several advantages over
conventional fabricated barrels – the main one being they produce less felt recoil.
Longthorne Gunmakers was founded in 2010, and has managed to grow despite the difficult economy. How did you accomplish this?
Like many prudent businesses, we had financial reserves available to us and little debt. We had always invested in state-of-the-art equipment, which although expensive, was and is rare to find in a sub-contract capacity. This, together with our skill level, enabled us to perform some very complicated machining at a premium price. Once the recession hit, we were able to manage with the high-value added sub-contract work, giving us the time to complete the development of our shotguns.
As other businesses move their manufacturing abroad, are you finding that customers are increasingly looking for British-made products?
It has been a growing trend within the English gun trade to have either part or all of their ‘in-house’ guns manufactured overseas by the large Italian, Spanish and Turkish manufacturers. It was important for us therefore, that our guns are truly English and every part of them is made in-house, particularly as a new name in the market, developing our own identity. Given that many of the top brands which are not wholly English still market themselves as such, I believe that our clients appreciate the fact that they can visit us and witness the process of making each part of the guns they are interested in buying. We have worked extremely hard making significant investment to be able to achieve this. England was once renowned for its engineering and gun trade, so it is my belief that it makes sense to combine the two.
What potential for growth do you see in the rest of the UK and beyond into Europe? Is this a major market for you?
Huge potential – we have already started exporting to Europe, USA and Australasia and in many cases, it is our clients doing the selling for us. I believe that the only issues with moving forward would be managing the demand. If you have the right product it, will always sell.
Looking into 2016, what do you anticipate for the company?
Now that everything has settled down after the move and we have engaged the right level of skilled staff, which took some time, we now have a great tea. We are concentrating on new models, we already have our new sidexside barrels designed and we are working on our boxlock model. We have also just had our US patent (besides our UK patent) granted which is a major stepping stone for the company, as far as our IP is concerned. We expect to have other international patents granted in due course.

Say Goodbye to Leather: The Digital Wallet Is Here to Stay