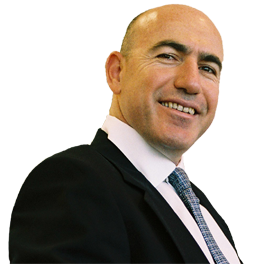 Dr David Gershon, an ex-String Theory physicist, who ran currency options for Barclays Capital in the end of the 90s, invented the first pricing model for vanilla and exotic options that truly reflected the market prices (as opposed to the theoretical Black Scholes model) and distributed it via a web based platform of his company SuperDerivatives. His new model became the benchmark for option pricing and was used by thousands of financial institutions. The availability of a real-time accurate price for any option soon changed the options market dramatically. The use of options spread all over the world, bid-ask spreads shrunk by over 50%, many corporations started to hedge their currency risk more efficiently with options and the liquidity in the options market more than quadrupled in 4 years.

Today most corporations use over-the-counter (OTC) options to hedge their financial risk and most hedge funds use options to express their forecast strategy, but less than 20 years ago options were a lot less popular as most market participants were not able to price them properly, bid- ask spreads were very large and their liquidity was very often scarce. In the 90s some banks started to offer some currency exotic options to their clients and the popularity of some of them started to grow from about 1995. However, very few traders in the sell-side and close to none in the buy-side were able to price them (or even very out-of-the-money vanilla options) precisely. In those days a common saying was “options prices are a matter of opinion”. Naturally, the inability to price options accurately drove many market makers to quote very large bid-ask spreads.

In those days, it was very rare that market makers approached each other for price quotes directly. Typically, when a bank needed to buy or sell an exotic option it had to call one of the interbank brokers (intermediator) and request a price quote for this option. The broker then approached all the market maker banks and requested their price quote. Taking all these prices into account, the broker would then show the bank that requested the price quote the best bid and ask prices. Yet, only market makers had access to the interbank brokers, and the OTC broker firms had representatives only in London, New York, Tokyo and Singapore. Hedge funds and corporations learnt a little bit about the market prices by requesting prices from several banks simultaneously, but sometimes they saw inverted prices from 2 banks and arbitraged these banks.

David Gershon started his Wall Street career in New York in 1993. In 1998 he was requested by Barclays Bank NY to relocate to the London headquarters in order to head the currency exotic options for the bank. London was the world’s largest trading centre for currencies and the volumes and activity in options were significantly higher than in NY. Being exposed to a new magnitude of flow, the concept that ‘pricing options is a matter of opinion’ did not make sense to Gershon and he decided to investigate it by collecting real quoted prices from all the interbank broker firms. He requested his 5 interbank brokers to send him on a daily basis all the bid-ask quotes they received during the day anonymously. In a period close to a year Gershon created a large database of thousands of quoted exotic option prices. He discovered that the majority of the quotes were very similar to each other, even though generated with no model, only by the ‘gut feel’ of the traders. It turned out that the few out-of-line prices were quoted by inexperienced traders or traders from very small banks that could make prices on a tiny notional. From his research Gershon was able to prove that there was a consensus price for each option. Apparently the saying “options price is a matter of opinion” serves as the rescue rope of those who could not price options in accordance with the consensus price.

With his physics background Gershon developed a revolutionary pricing model that produced the consensus prices in his database. He continued to verify the accuracy of the model with quotes he received from the market for several years after to ensure that it truly reflected the market, i.e., always produced the consensus prices in the market. Unlike the Black & Scholes model that was based on the fact that the underlying asset price behaves like a smoke particle (Brownian motion), Gershon addressed the option price from a traders’ perspective, quantifying his and his colleagues’ ‘gut feel’ for pricing options. Gershon realized that his model could help the options industry tremendously if it is made available for all the professionals that use options.

In 2000, Gershon left Barclays Capital to start his own company SuperDerivatives. In January 2001 the company launched its first website which included a real-time system for pricing and risk managing currency options. At the beginning Gershon approached the market maker banks that had access to the interbank broker market in order to gain their endorsement that the model indeed produces the market prices. Then he addressed the smaller banks who traded back-to-back with the market making banks, then he approached corporations and hedge funds and finally banks sales staff who needed to check their traders’ prices before showing them to their buy-side clients. At that time some of their clients already had the SuperDerivatives system.

In less than 3 years Gershon’s vision came true when the system became the benchmark for options used by thousands of institutions around the world. The options transparency spread out very quickly by word of mouth and as the system was used by almost all the banks in the world, the bid-ask spreads started to narrow. Knowing the right price allowed traders to compete and quote competitive prices. The narrow bid-ask spreads allowed more and more participants in the buy side to start trading options and the liquidity in the market increased dramatically. Local banks in many emerging markets such as Singapore, Thailand, Indonesia, Morocco, Poland, Czech Republic, Saudi Arabia, Abu-Dhabi, Dubai, Israel, Philippines, etc., started to quote options on their own currency to their clients and new markets formed. A comparison between bid-ask spreads in 2004 and 2000 showed that the bid ask spreads narrowed on average by around 50%. This triumphant achievement has transformed the options market completely. Almost all the corporations started to examine hedging strategies with options in order to optimize hedging their exposure and some accounting rules came up to link options usage to the exposure. In just a few year after Gershon’s SuperDerivatives introduced price transparency the options market became a lot more efficient and liquid and the daily trading volumes quadrupled.

Over the years SuperDerivatives became one of the leading global market data vendors, recognized as the ‘best provider for derivatives data’ ahead of the well-known data providers Bloomberg and Thomson-Reuters. It continued to provide state-of-the-art systems and every few years pioneered the market with new technology. In 2005 it launched the first multi-asset system for derivatives, in 2010 it launched a free text modern pricing desk top with a different version to banks, corporations and hedge funds and in 2012 it launched its revolutionary market data terminal. SuperDerivatives was acquired by Intercontinental Exchange in 2014.