8. Andy Krieger vs. The Kiwi Result: $300 million profit Following Black Monday, an aggressive trader working for Banker’s Trust by the name of Andy Krieger began watching some of the world’s currencies that were rallying against the battered US Dollar. Andy Krieger had graduated from Wharton School and begun working for Salomon Brothers. In […] 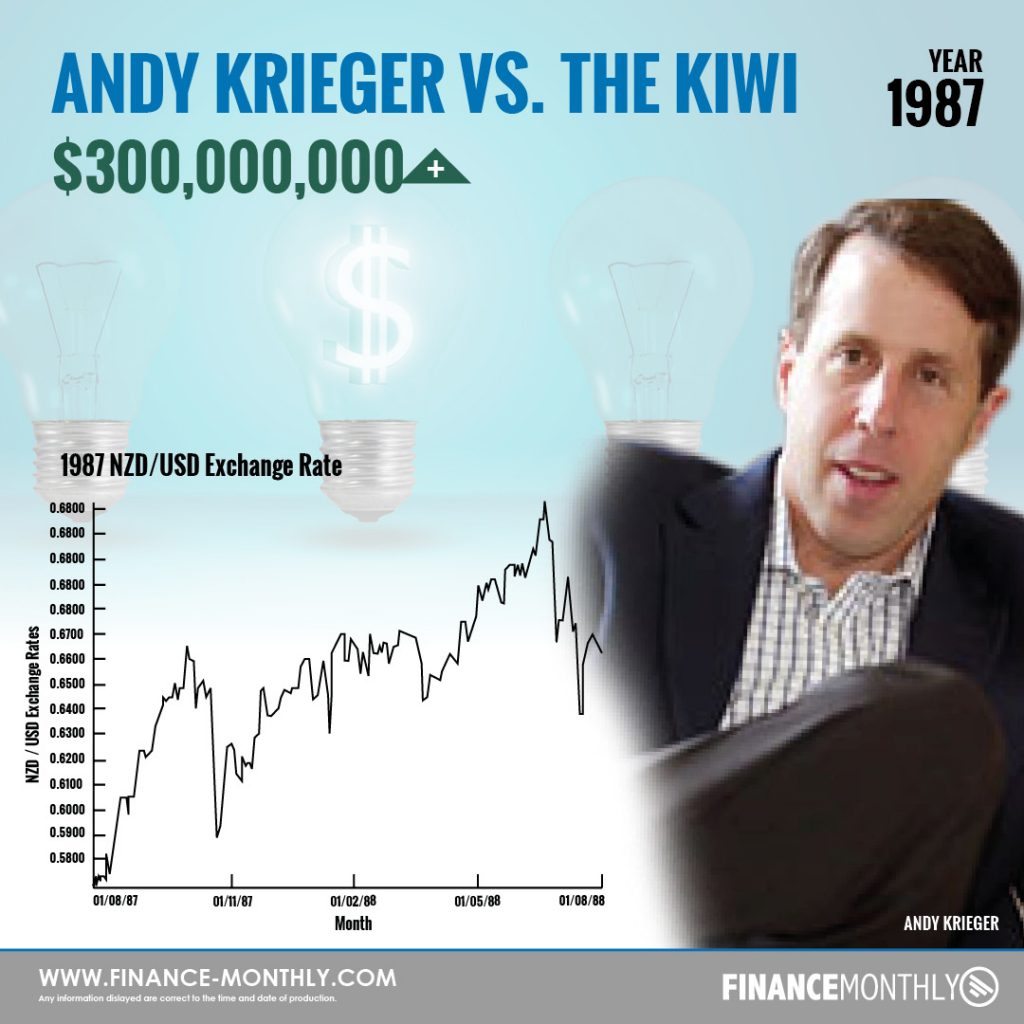 8. Andy Krieger vs. The Kiwi

Following Black Monday, an aggressive trader working for Banker’s Trust by the name of Andy Krieger began watching some of the world’s currencies that were rallying against the battered US Dollar.

Andy Krieger had graduated from Wharton School and begun working for Salomon Brothers. In 1986 he was taken on by Banker’s Trust and his gift for trading quickly gained him not only a reputation but also the unwavering trust of his employers.  In fact Krieger’s prowess was such that Banker’s Trust allowed him to trade with a limit of $700 million which was a whopping $650 million more than almost all his counterparts.

But like Paul Tudor Jones it was his work in 1987 that cemented his place in trading legend.  In the aftermath of Black Monday, as all the investors fled to other currencies that had suffered less in the crash, Krieger spotted that some were being significantly overvalued. One such was the New Zealand Dollar, or as it’s more commonly known, the “Kiwi”.

Krieger decided to make a move on the Kiwi and used Options (which at the time were a relatively new technique) to short the New Zealand currency by hundreds of millions of dollars, with some reports suggesting the move was as large as $1 billion. Krieger’s short was so big that it is claimed to have been larger than the money supply of New Zealand as a whole, in effect Krieger controlled more of the New Zealand dollar that was actually in circulation.

The New Zealand Government rallied and attempted to prevent the move. It didn’t work. Despite a reported call from the New Zealand government to Krieger’s employers, Banker’s Trust, the pressure on the Kiwi proved too much for the market to bear and as other traders fell in line with the short, the Kiwi slipped 5% turning Krieger’s short into a $300 million profit.

Krieger himself was paid what he called a “tiny” bonus of $3 million and it began a sequence of events that led to him leaving the Banker’s Trust in fairly acrimonious circumstances and going to work for George Soros at Quantum.  He has since moved on to work for Northbridge Capital Management.  Despite his aggression on the trading floor, Krieger is a known philanthropist and his donations include sending $350,000 to victims of the devastating tsunami that hit Indonesia in 2004.

Next: Betting on Saddam Hussein and the Iraq War