5. George Soros – $1 Billion Bet Against the Pound Result: $1 Billion Dollar Profit Although not the biggest trade by some distance, this is one of the most well-known trades ever and earned Soros the monicker, ‘The Man Who Broke the Bank of England’. In 1992 the British economy looked to be performing well […] 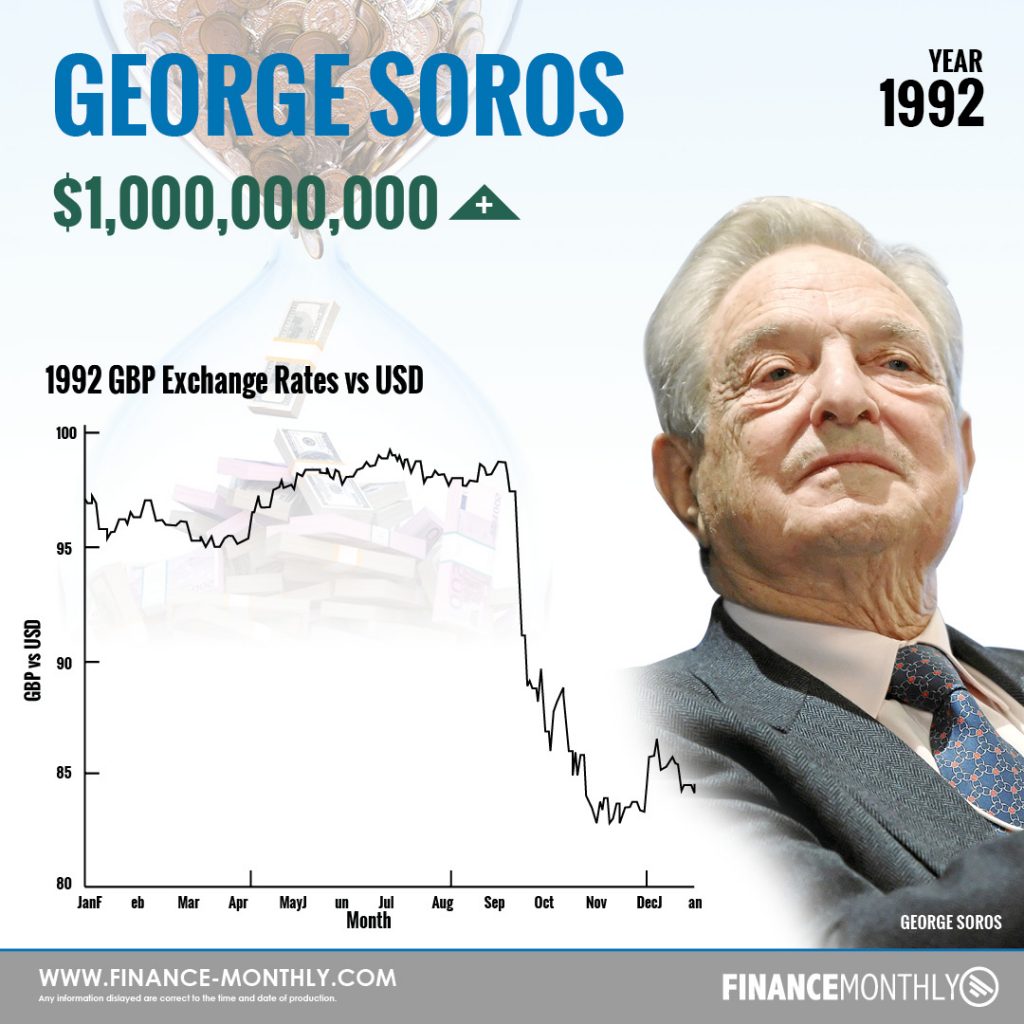 Although not the biggest trade by some distance, this is one of the most well-known trades ever and earned Soros the monicker, ‘The Man Who Broke the Bank of England’.

In 1992 the British economy looked to be performing well to most observers. However, as part of the European Exchange Rate Mechanism (ERM), the Pound had to remain within 6% against other currencies who operated within this system. The issue that The Bank of England had was that appearances can be deceptive and as the German Mark continued to perform strongly with low inflation, Britain’s inflation was almost treble their German counterparts. The Bank of England’s hope that the ERM would reduce inflation was spotted as a fallacy by George Soros and his Quantum Fund.

With this in mind, Soros, seeing through the attempts to disguise a currency in trouble made his move. He began to borrow heavily in order to short the Pound. Taking up a position that exceeded $4 billion in total against the pound the Bank of England in an attempt to stave off the inevitable and raised their interest rates to 12%. The move worked against them, to other investors it signalled that there was an issue with the pounds stability and the government quickly realised that paying back the interest on a struggling currency was going to rack up billions in bills. A last ditch attempt to raise the interest rate to 15% was aborted and the Bank of England conceded defeat, exiting the ERM and watching as the Pound freefell by 25%, on a day that would be coined ‘Black Wednesday’. Although later some would refer to it as ‘Golden Wednesday’, because it signalled the beginning of a stunning resurgence for the Pound.

Either way, Soros had pulled off a truly remarkable trade and walked away with $1 billion for his efforts. The trade’s notoriety stems from the fact the George Soros had the audacity to attack the currency of a seemingly well performing major economy and come out a billion dollars better off.

Soros continued to trade for many years very successfully but stepped away to concentrate on philanthropy in 2000. His legend status secured, principally by this trade, he has since gone on to criticise his own shorting tactics, but remains an icon of Wall Street.

Next:  Big Bet on the Deutschmark, Twice.