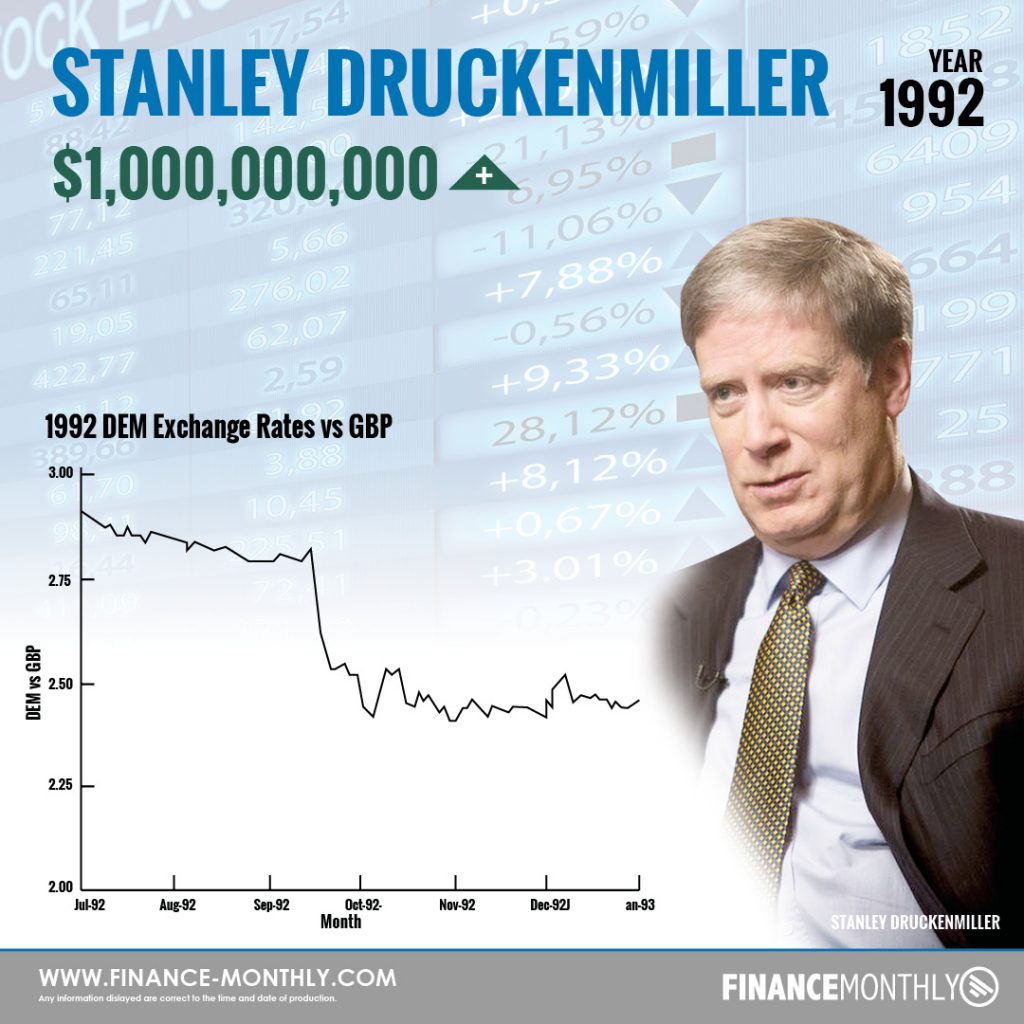 It would be impossible not to feature Stanley Druckenmiller in this list. It would also be impossible not to discuss his greatest trades alongside Geoge Soros’s bet against the British Pound. Not only because Druckenmiller was for years one of the lead portfolio manager for Soros’s Quantum Group, but because at least one of the trades can be viewed as working in tandem with the Soros trade to form an astonishing double-play of currency trades that has never been repeated.

Druckenmiller had worked in the trading game since 1977 with great success, which is why in 1988 Soros, seeing a kindred spirit and trader who shared his tactics and ambition, decided to bring him onboard at Quantum.

His first play at betting on the Deutschmark occurred during the fall of the Berlin Wall. The markets had been very severe on the prospects of the East and West German re-unification and as a result, the Mark sat in a position that Druckenmiller thought to be too excessive. Seeing the potential mis-calculation and studying the strength in the economy Druckenmiller began a multi-million-dollar bet on the mark to rally. This quickly increased to $2 billion following support from Soros who was quick to support and share Druckenmiller’s vision. Over the next few months, their position that the forecasts had been harsh and the future was brighter than others contended, Druckemiller’s initial bet bought in returns of 60%.

Perhaps emboldened by this, Druckenmiller’s second play, again involving Soros and the Quantum Fund, was even more successful. As Soros battered the Bank of England, Druckenmiller sensed the opportunity to bet on the Mark once again. Beginning by buying up British stocks on the assumption that as the pound dropped (which it did spectacularly) and that exports would increase, he followed that by buying up German bonds, guessing correctly that other investors would follow during the fallout of the Pound. The trade was a stunning success earning an additional $1 billion.

Druckenmiller continued to work with Soros until 2000 when they parted ways following a series of big losses in the technological market. Deciding to continue, Druckenmiller moved forward with his Dusquene Capital group, but closed the group in 2010 citing a “high-emotional toll” of managing the fund. If that sounds a little like a melancholy end, it’s best not to feel too bad given that Druckenmiller sits on an estimated personal wealth of $4 billion and continues to trade from his home.

Next: The Real Winnner of The Big Short 1