2. John Paulson – The Real Winner of The Big Short 2 Result: $4 Billion Profit Paulson was the other, and perhaps, more famous winner from the ‘The Big Short’. A successful if unremarkable trader in 2006, no one expected Paulson to be the man who won big. Having set up his own Hedge Fund, […] 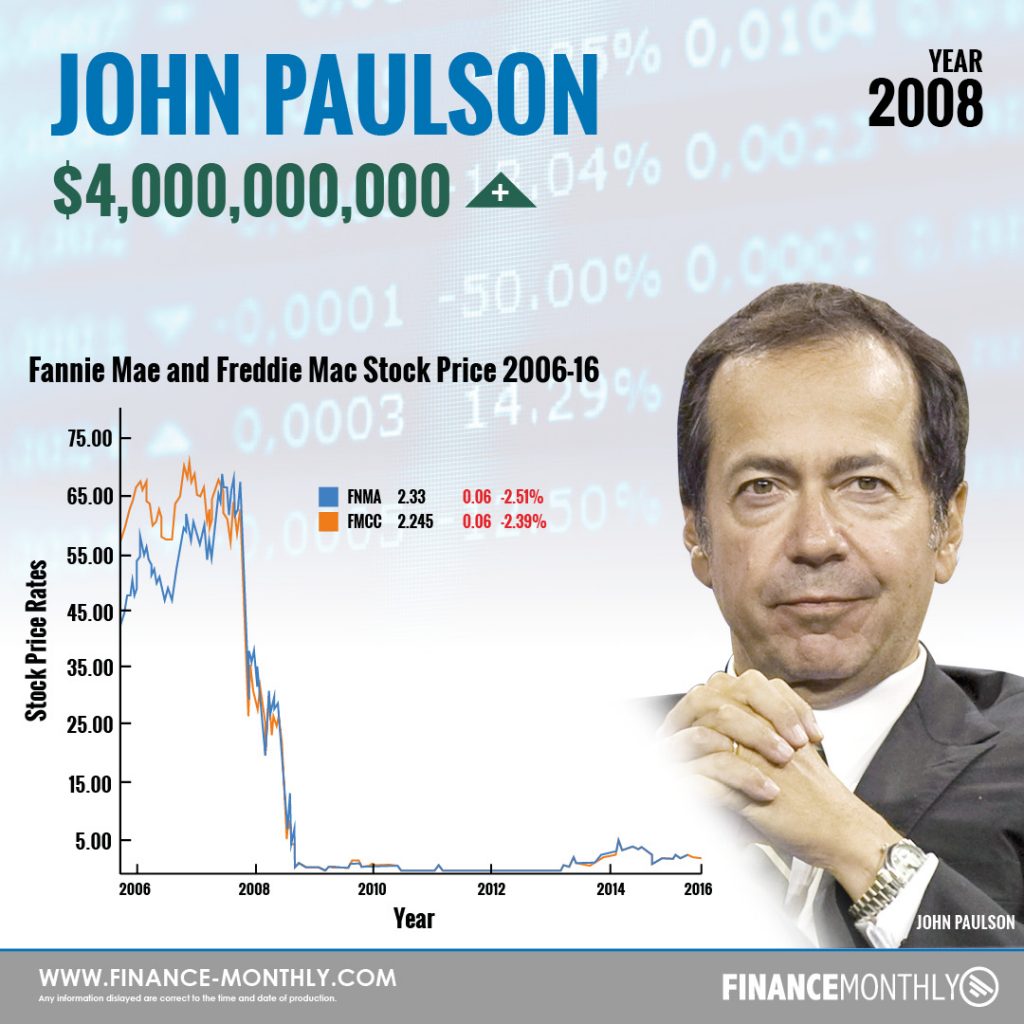 2. John Paulson – The Real Winner of The Big Short 2

Paulson was the other, and perhaps, more famous winner from the ‘The Big Short’. A successful if unremarkable trader in 2006, no one expected Paulson to be the man who won big. Having set up his own Hedge Fund, Paulson & Co in 1994 with $2million dollars, in an office rented from Bear Sterns, he’d expanded it to manage around $100 million by the middle of the decade. However, in the skewed reality of Wall Street, he wasn’t seen as a large player.

All this changed when he and his analyst, Paulo Pellegrini started to look into the US Housing market. While Dr Michael Burry at Scion Capital may have been the first to notice the cracks in the foundations, he was largely unable to get investors to back him. Paulson was. He managed to get around $150 million dollars (a relatively small amount) and then persuaded the banks to sell him a whole heap of Credit Default Swaps, which are basically insurance against debt. Then he and Pellegrini waited. Their theory paid off in such an astounding manner that when during 2007, as things began to fall apart for the big banks, their investors thought an email revealing profits of 66% was a misprint and should have read 6.6%. On some days they were making over a billion dollars a day. By the end of 2007 Paulson & Co had made $15 billion, and they hadn’t finished. As the markets continued to collapse Paulson raked in another $5 billion for the fund and estimates put his own personal take at $4 billion.

In a twist of irony, Paulson attended a lunch in 2008 with Bear Sterns that began as an effort by the bank to prevent hedge funds from pulling out and ended with all the other hedge fund managers listening to Paulson and realising Bear Sterns was in more trouble than it was aware of. As more people took money out of Bear Sterns, it appeared that Paulson had sent the company that rented him his first office space towards collapse.

Paulson has continued to trade, having another bumper year in 2010 earning his fund over $5 billion, but has also suffered some notable losses. He is still a major player and has more recently moved into the Gold market.

Next: Betting on the Beleaguered Banks