What is the Financial Impact of Gun Violence & Mass Shootings in the US?

Since 1968, there have been 1,516,863 gun-related deaths on US territory compared to 1,396,733 war deaths since the founding of the United States[i]. This means that up to 2015, according to data collected by Politifact, the death toll for citizens and visitors of the United States from domestic gun violence exceeds that of all the […] 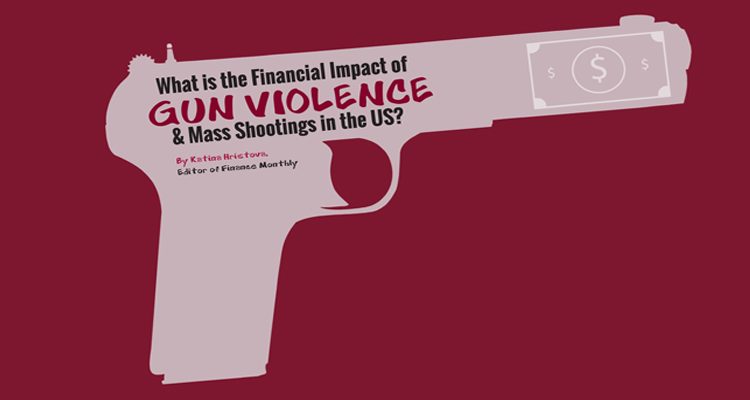 Since 1968, there have been 1,516,863 gun-related deaths on US territory compared to 1,396,733 war deaths since the founding of the United States[i]. This means that up to 2015, according to data collected by Politifact, the death toll for citizens and visitors of the United States from domestic gun violence exceeds that of all the deaths from all the wars the US has participated in since its inception.

The statistics on US gun violence remain mind-boggling to many. A study by Health Affairs states that more than 100,000 people are shot each year in the US. 350 people are estimated to have been killed in American mass shootings[ii] this year, according to data gathered by GunsAreCool – a sarcastically named community that tracks gun violence in the country. In comparison, 432 people were killed in mass shootings in 2016 and 369 in 2015, which means that on average, more than one person is killed in a mass shooting for every day of the year. According to the Small Arms Survey via the Guardian, America has 4.4% of the world’s population, but almost half of the civilian-owned guns around the world.

For both individuals and society as a whole, gun violence imposes heavy psychological burdens. The media regularly highlight the emotional cost, and rightly so. But what is the economic cost of US gun violence? What is the financial cost to society from all that carnage?

Back in 2012, Mother Jones, the liberal magazine, launched a three-year investigation, following the Colorado cinema shooting rampage in July, when James Holmes killed 12 people and injured 70. The magazine went through the combined annual impact of a total of about 11,000 murders, approximately 22,000 suicides and 75,000 injuries that are the result of gunfire. The findings of the investigation showed that the annual cost of fatal and non-fatal gun violence to the US was $229 billion, representing 1.4% of total gross domestic product. In comparison, obesity in the US costs the country $224bn, which makes the economic impact of gun violence higher than that of obesity. These $229bn are also the equivalent of the size of Portugal’s economy or the equivalent of $700 for every American citizen.

The study notes that about $8.6bn is direct cost, including emergency care and hospital charges, the expense of police investigations, the price of court proceedings, as well as jail costs. According to the investigation, $169bn goes to the estimated impact of victims’ quality of life, based on jury awards for pain and suffering in cases of wrongful injury and death, and the rest $49bn account for lost wages and spending.

It is of course worth mentioning the positive economic impact that the gun and ammunition manufacturing industry has on the country, which according to IBIS World was $13.5 billion in 2015, with a $1.5 billion profit. However, it is also worth pointing out the distinction between the profit from manufacturing the very products used in shootings, in comparison to the financial loss seen due to gun violence.

The impact on US firearm manufacturers

In recent years, firearms sales tend to increase and gun stocks tend to rally in the immediate aftermath of mass shootings in particular. Shares on gun manufacturers such as Sturm, Ruger & Co. (RGR, +1.91%) and Smith & Wesson maker American Outdoor Brands (AOBC, +0.74%) rose sharply right after the mass shooting in Las Vegas from earlier this month, when 59 people were killed and hundreds were injured. Only a few hours after the deadliest mass shooting in modern US history, shares of Sturm, Ruger & Co. rose 3%, American Outdoor Brands jumped 5%, while Vista Outdoor (VSTO, -0.67%) popped 2%. The explanation behind this is quite simple – investors predict a rise in sales as people buy firearms to defend themselves and their families in the event of another potential attack. Sales are also likely to spike due to the fear that an attack may result in law changes and guns becoming harder to buy.

Despite the fact that mass shootings lead to increased firearm sales, research by Anandasivam Gopal and Brad N. Greenwood published on 28th May 2017, points out that when mass shootings occur, investors appear to be reducing their valuations of publicly traded firearms manufacturers – an effect driven by the threat of impending regulation. However, these tendencies were most prevalent in 2009 and 2010, but seem to disappear in later events, indicating the possible markets’ acceptance of mass shootings as the ‘new normal’.

How do local economies respond to increased gun violence?

A report by the Urban Institute, published on 1st June 2017, found that surges in gun violence in the US can ‘significantly reduce the growth of new retail and service businesses and slow home value appreciation’. According to the study, higher levels of neighbourhood gun violence drives depopulation, discourages business and decreases property values, resulting in fewer retail and service establishments, fewer new jobs, lower home values, credit scores and homeownership rates. The report features interviews with local stakeholders (homeowners, renters, business owners, non-profits, etc.), who confirm the findings, which state that  ‘Business owners in neighbourhoods that experience heightened gun violence reported additional challenges and costs, and residents and business owners alike asserted that gun violence hurts housing prices and drives people to relocate from or avoid moving to affected neighbourhoods’. In Minneapolis for example, the report finds that each additional gun homicide in a census tract in a given year was associated with 80 fewer jobs the next year, while average home values in Minneapolis census tracts dropped by $22,000.

It seems as if the US lawmakers, and indeed large swathes of the US population, are now willing to accept gun violence as a part of their daily lives in a manner that may shock others. But what is more surprising is that a country founded on capitalism permits this as the status quo in the knowledge that gun violence is having a severe and negative impact on the US economy. From hospital fees through to deterring business investment, mass shootings and gun crime are the cause of considerable financial losses to the United States. These acts of violence cost the country a great deal of money, but most importantly – they cost lives. And although markets have seemed to accept mass shootings as ‘the new normal’, should this be the case for the rest of us too?

[i] That figure includes American lives lost in the revolutionary war, the Mexican war, the civil war (Union and Confederate, estimate), the Spanish-American war, the first world war, the second world war, the Korean war, the Vietnam war, the Gulf war, the Afghanistan war, the Iraq war, as well as other conflicts, including in Lebanon, Grenada, Panama, Somalia and Haiti.

[ii] Mass shooting being defined by the FBI as any incident where at least four persons are killed with a firearm in a random act with little or no premeditation.