Financial Markets appear to have welcomed the potential greater certainty as sterling surges to over $1.30 with more increases expected

Financial markets seem to have embraced the results of the UK general election with the pound recording its biggest rally in almost 3 years.  Shares also saw huge surges following the news that Boris Johnson’s Conservative party had secured a majority victory.

Shortly after the exit polls were announced around 1opm GMT, Sterling saw a jump of 3 cents against the dollar pushing it up to $1.35 and marking the the currency’s highest level since early 2018 and its biggest gains since 2017. Although Sterling did slip back a little later, both analysts and businesses have noted a much stronger position.  In addition to a strong performance against the dollar the pound also enjoyed a surge against the Euro that hasn’t been seen since before the Brexit vote.  Many are predicting that the pound will continue to rise and could hit $1.40.

Nigel Green, Chief Executive of Devere said, “Many traders were caught off-guard by the size of the majority and this may push the pound even higher than previous predictions. We could see bullish traders now take it to $1.38 or maybe even as high as $1.40.” 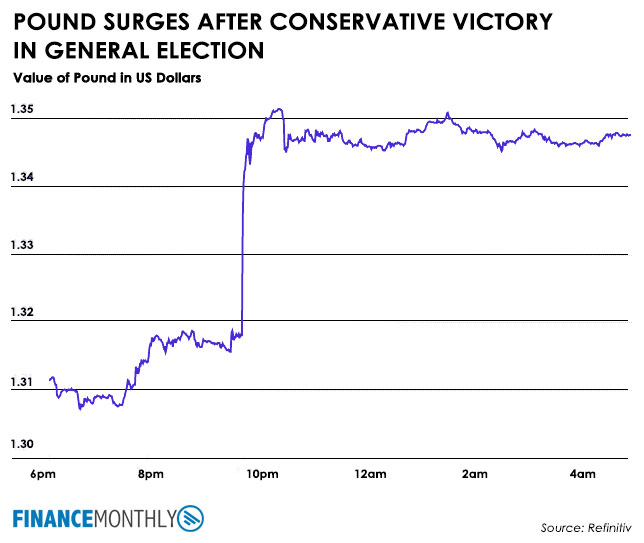 Johnson’s victory was welcomed with open arms by investors who have suffered years of uncertainty ever since the EU referendum took place in the summer of 2016.  The hopes are now that with a majority the parliamentary gridlock that has plagues UK business will now be a hurdle that the Government can overcome.

Many businesses suffering from the fears of a hard Brexit saw double-digit gains throughout the evening as investors flooded back into UK businesses.  Housebuilders including Berkeley Group, Taylor Wimpey, Barratt and Barratt all enjoyed a significant resurgence.  As did several of the utilities companies as the rumoured threat of nationalisation if Labour had overturned the Conservatives. Centrica was up by 8% on the FTSE 100 and Energy Group SSE saw a 10% gain.  Telecommunication giant BT who had also been under threat had Corbyn been victorious also made similar gains.

Banking also enjoyed some respite from a bruising couple of years with Virgin Money heading the pack with a 17% increase, followed by Royal Bank of Scotland (11%) and Lloyds (7%) to make it an evening to savour.

There are now renewed hopes that as the political uncertainty subsides, consumer spending will see a significant boost.  This was reflected in the surge on many retail and leisure stocks with Marks & Spencer (9%), Tesco and Sainsbury’s all seeing gains.

“Sterling and stability for three and a half years are words that have seldom been seen together. Now finally they might. As the sleep-deprived incredulity of the morning after fades, the Pound is drifting. But nevertheless it shows no sign of giving up the gains it made as last night’s momentous exit poll came in.

“Breathless talk of a Brave New World for sterling maybe overblown, but two fundamental factors that had been holding down the Pound have changed.

“Firstly the scale of the Conservatives’ victory means Boris Johnson’s withdrawal deal should sail through Parliament, finally breaking the Brexit deadlock that has so tortured the markets.

“Equally the size of Mr Johnson’s majority will give him a freer hand in the nitty gritty of trade negotiations next year. He will no longer need to pander to Britain’s hardcore leavers – meaning the end result could potentially be a softer, more market-friendly Brexit.

“The threat of a chaotic ‘no deal’ has not gone away but it has receded, and for now the Pound is likely to cruise in a higher trading range than it has done for years.”

As investors and businesses enjoy the morning after, hoping for a brighter Brexit-based future, it still remains to be seen what Boris Johnson’s new government will be able to achieve. But for the first time in several years, there is a genuine sense of optimism in the markets.