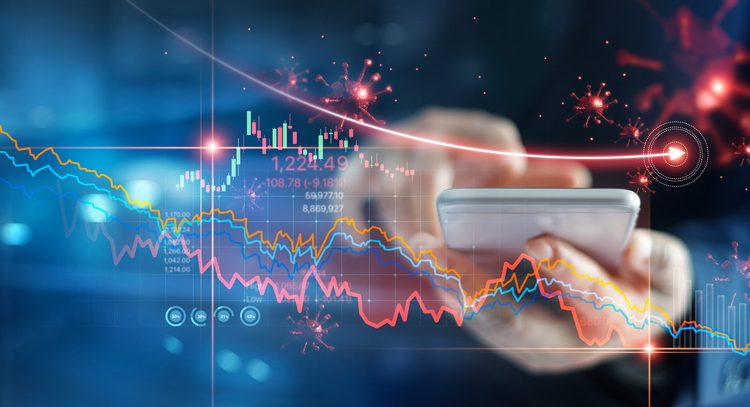 Despite the crushing economic damage inflicted by coronavirus lockdowns on the global economy, the apparent disconnect of extraordinarily strong global stock markets has been the defining narrative of 2020. Market upside has been concentrated in a small number of tech firms, not just the mega-stocks like Amazon, Alphabet and Facebook, but also new IPOs hitting record valuations.

Perhaps the biggest winner has been Tesla. Never has a stock looked so much like a bubble set to burst. But don’t say that to the army of RobinHood retail traders who have thrown themselves into the stock convinced by the messianic appeal of Elon Musk. Say anything negative about Tesla’s unjustifiably high price and you will be trolled mercilessly. Tesla is worth more than industry leader Toyota – which profitably sells 23 million cars a year. Tesla is yet to make money on car sales and will be lucky to sell 500k autos this year.

Even good tech stocks look expensive. In the face of rising bankruptcies, the closure of global hospitality and travel, and the lengthening dole queues, the fact that Apple became the first $2 trillion company – a market cap larger than the entire FTSE 100 – seems extraordinary.

These little niggles aside, if you have been investing in tech for a long time, then 2020 has been a pretty good year for your stock portfolio. But, as we all know, there is never a good time to be comfortable about markets. When the laws of financial gravity don’t seem to apply to a particular sector – that’s the time to be nervous.

There is an innate appeal to tech stocks – especially those that are excitingly disruptive, creating new products and markets, and whole new revenue streams. They drive entirely new economic growth which investors are keen to align themselves with. Old-school companies compete for a share of existing customer revenues – the good tech companies are attractive because they create new value. At least that’s the generally accepted wisdom.

The reality is that, in the long-term, tech stocks aren’t that different from any other business sector. They are subject to competition, demand, and also the threat of regulation. All these things ultimately conspire against them. Successful businesses mature, but the larger they are, the increasingly bureaucratic they become. Successful tech entrepreneurial innovators are soon replaced by corporate lawyers and brand reps.

What is particularly interesting is how the largest tech stocks are now seen as critical components of any stock portfolio, but the lesson from tech in the last 20 years has been the extreme speed at which new firms have emerged and created completely new products and markets. 20 years ago, the pre-iPod Apple was a struggling computer seller, Amazon was a bookshop that used the internet because it couldn’t afford a storefront. If you wanted to watch a film at home, you nipped down to your local Blockbuster. Facebook and Uber didn’t exist. Autonomous driving was a science-fiction dream – now it seems accessible in the next few years or decades.

And if people, including myself, are stupid enough to pay £1200 for the new iPhone XII to replace a perfectly serviceable, but one-year-old model, then that’s my problem!

It feels like a dose of reality is coming back into the market for tech stocks. The first big tech failure of this modern age was late last year when WeWork imploded. (Some would argue it was just an office rental firm masquerading as innovative tech.) Other IPOs don’t look as glossy as their hyped prices suggested – many have fallen in value and failed to match rosy expectations.

More to the point, there is a greater focus on the realities of tech, where the threats are multiplying.

The first threat is regulation. Nothing kills a market as effectively as government oversight and over-regulation. At present there are a number of regulatory threats out there:

The biggest issue will be the regulation of “surveillance capitalism” and directed feeds – the way in which targeted news flow and advertorial is being directed at social media users by algorithms. It’s emerging as the prime driver of vastly increased electoral polarisation. Influencing potential customers with “curated” news feeds sounds a little different to subliminal advertising, which was banned in the 1960s!

Governments are going to act on how Big Tech operates. That may mean dramatically limiting what Facebook and Google can do. It will be hard to re-cork the fake-news bubble – that genie is already on the loose! Maybe Amazon has become a too-powerful monopoly? Would it change much to break it up the same way the oil majors were forced to unravel 120 years ago? And if people, including myself, are stupid enough to pay £1200 for the new iPhone XII to replace a perfectly serviceable, but one-year-old model, then that’s my problem!

And then there is the issue of competition. Netflix is a good example. It pioneered the streaming revolution. Now there are a host of other streaming services. But the most exciting is probably Disney. Competition is the critical issue. Netflix is the clear streaming leader with 32% of total streamtime viewing. It produces plenty of its own fantastic content and has rights on plenty of other stuff that people want to see. Disney’s streaming services get a respectable 16% of streamtime but have the advantage of a great stable of entertainment classics, plus the Marvel and Star Wars franchises. It’s already spending more on content than Netflix. In less than a year, Disney+ has grown faster than Netflix and attracted 60 million subs.

If the fears about tech multiply and investment flows into undervalued but profitable, dividend-paying fundamental stocks – that’s a whole new game.

Disney has just announced a refocus to spend more on creating new content for its streaming businesses. It didn’t have much choice. Coronavirus has slaughtered its parks business (down 83% from 6.6 bn in Q3 2019) and new film & studio business (down 55% since this time last year). The virus has shaken Disney awake. Creation, distribution and monetisation of content is its future – which means that an old-school company is eating Netflix’s lunch.

I reckon we will see the same thing in Electric Vehicles. It’s the hot sector with multiple new companies competing for funding even as the established gas auto companies introduce their takes on the market. Competition in the EV sector will pull down margins and push up the cost of lithium. Tesla may have a first-mover advantage, but is its huge market cap justified by the small number of cars it makes, declining margins and the competition?

The third issue is the ebb and flow of markets. Tech stocks are popular today in what still looks like a growth market, but other stocks look relatively cheap. If the fears about tech multiply and investment flows into undervalued but profitable, dividend-paying fundamental stocks – that’s a whole new game.

The reality is today’s hot tech stocks might be tomorrow’s smokestacks.