What Sectors Will Outperform the Market in 2021

With the ever-rising share of passive investors on the market, we’ve seen a clear trend. The correlation between individual stocks has increased dramatically. For investors, this means that the stakes for being in the right sectors are enormous. 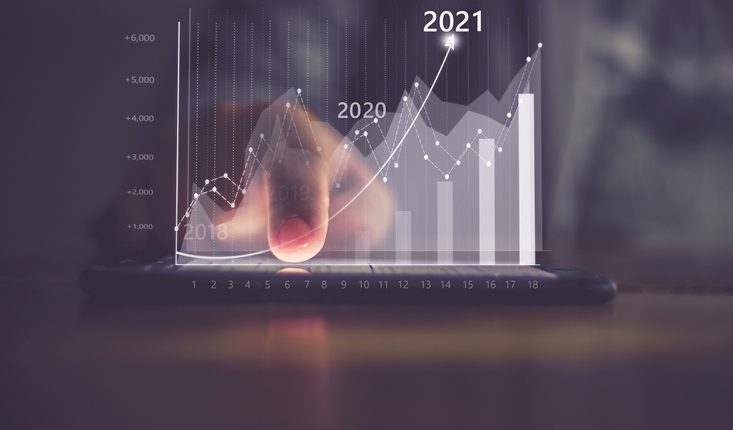 Ibbotson and Kaplan, in their 2000 study, demonstrated that asset allocation is responsible for nearly 90% of portfolio risk and return. With that in mind, if we seek to outperform the market — looking for the next Amazon or Tesla would surely do the job, but that will be the equivalent of searching for a needle in a haystack. A more realistic goal for the retail investor would be to overweigh their exposure to the right market sector.

In search of optimal portfolio allocation

Let’s start by first looking at some historical information that would help us align our expectations for the future. The time we’re living in currently is quite interesting. Nine months have passed since the start of the bear market in February, and the market is back to pre-crisis levels already. That might mean that the recovery’s tempo might slow down a bit but looking at the job market and the GDP figures — there’s undoubtedly more space for growth.

Since the 1960s there have been three sectors that have consistently outperformed the market in the early stages of economic recovery: Real estate, Financials and Consumer Discretionary.

The one thing they have in common is the boost from low-interest rates, as those are the sectors most dependent on credit. Of course, we should not fall prey to a time period bias, as no two recessions are quite the same, so we need to closely examine each sector’s prospects in the current COVID-19 environment.

Initially, this sector was one of the worst-hit, falling almost 40% in March. However, in the past few months, we’ve started to see a resurgence. The broader real estate index VNQ has outperformed the S&P almost 2 to 1 in the past month, returning 6% vs. 3.11%. One may ask, what led to this strange turn of events?

First, we see an unprecedented boost in residential real estate deals, stemming from the record-low mortgage rates combined with the increased consumer confidence in the summer months. Existing and new home sales skyrocketed in July to levels last seen in 2006!

While those figures show there’s a healthy demand for both multi-family apartment buildings and single-family homes, we’ve seen that there’s a clear winner in the residential space — single-family homes. We believe that’s the subsector that’s most likely to outperform due to the long-term structural changes resulting from the crisis. Two factors are most likely to drive growth in the single-family market segment. First, families facing job loss and weakened financial position are being priced out of the downtown, suburban areas. They are likely to drive up demand for rent in single-family properties farther away from the metro areas. Work from home is the second factor that we can’t help but acknowledge. When people no longer have to be close to their offices, they tend to move out to more affordable areas. Altogether — big cities lose their appeal when all their experiential amenities are closed, and WFH being a viable long-term option.

Some honourable mentions in this sector are data centres, logistics properties, and telecommunications infrastructure. These segments benefit from some healthy tailwinds from the COVID crisis, but this has been reflected in the price to a large extent. The YTD return on all three is currently in the double digits.

We believe that the biggest opportunity for abnormal risk-adjusted return in the real estate field is in the residential market. It has always been one of the most stable parts of the market, the tailwinds are starting to materialise just now, and the broad residential index is still down almost 10%, signalling that there’s still plenty of room for growth.

In this sector, unfortunately, the prospects don’t seem as promising. It’s considered to be one of the best during the early stages of economic recovery, and it may look like it’s doing well again — the XLF has outperformed the S&P in the three-month and six-month time frames. This run-up has been caused by the generally positive market sentiment around the vaccine news. Banks were severely battered in the first couple of months of the recession, so they had some more catching up to do. Some believe that the rally depends more on the regression to the mean than on the industry’s actual fundamentals.

We have to address the elephant in the room — interest rates.

Central banks in all parts of the western world slashed rates to 0%. In the short term, that actually looks good for banks, as their profits jump due to the appreciation of their existing fixed income securities. However, when interest rates are at 0% for an extended period, adverse side-effects appear. Namely, there’s a reduction of the net interest margins, which leads to a slower expansion of loan books and balance sheets, hence the reduced profitability. During the most recent meeting, the Fed signalled that interest rates might remain at 0% until 2023! Considering the impact on margins that this may result in, the risk/return profile is currently not overly appealing.

Consumer discretionary has always been one of the most cyclical sectors. This time around, though, the performance between the individual components is highly varied. The consumer cyclical index XLY is still up nearly 26% YTD, double the S&P returns. However, this performance is only caused by the few top holdings of the index. Amazon has been a considerable driver behind this — being up close to 70% YTD! On the other end of the spectrum, we see travel services, lodging, and resorts, each being down YTD. With the vaccine news coming up, and consumer spending back to pre-COVID levels, we expect the tide to turn with time. The big e-retailers indeed had a good time during the past few months, but the valuations are starting to look a bit crazy. On the other hand, there’s still plenty of bargains in the lodging/resorts sub-sectors. Of course, there are many risks involved with these stocks, as they are currently burning a ton of cash, and the leverage levels are also high, but that’s the high-risk, high-reward play.

Auto manufacturers are also giving online retail a run for their money. As of the 25th of November, Tesla is up 563%. Those, however, are rookie numbers compared with NIO’s cosmic rally of 1200%. Now there’s much speculation going on with the EV stocks these days, and no one will argue that some of the valuations are a bit disconnected from reality. It’s just momentum traders piling on the next ‘big’ thing. However, we must not fully disregard this, as it’s pointing us to a hint about the future.

Assets under management in ESG funds have quadrupled to $250 billion in the past three years.

The rise of ESG investing

Younger investors are especially concerned with their investments’ environmental implications, and they are putting their money where their mouth is. Assets under management in ESG funds have quadrupled to $250 billion in the past three years. And the speed of capital accumulation in this field is increasing. That means that all active investors should start seriously evaluating the ESG factors of the companies they invest in. Being in the right sector is the first step towards achieving superior risk-adjusted returns, but for the years to come — investing in stocks that have positive ESG scores will help to maintain momentum on your side.