President Biden – What Will It Mean for Investors?

The incoming president will arrive with ambitious plans for the economy. But what organisations will be affected, and what are the odds that these new measures will even be passed in the first place? 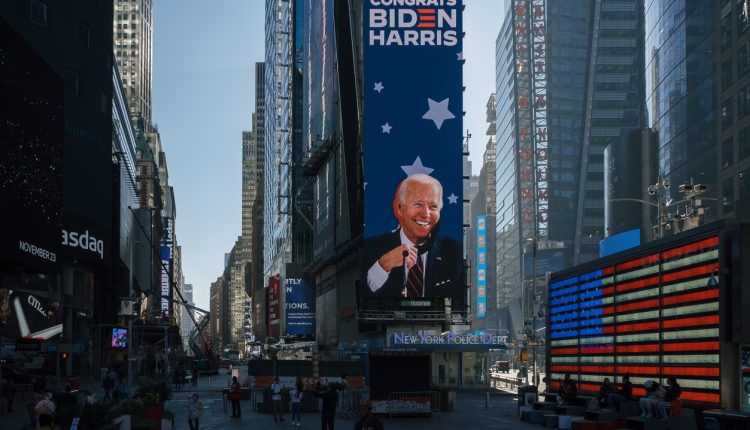 Giles Coghlan, Chief Currency Analyst at HYCM, offers Finance Monthly his insight on the possible impact the Biden administration will have on the markets.

The 2020 US Presidential election has produced what now seems to be a clear result: Joe Biden will be the next President of the United States. Interestingly, during the same week as the election, Pfizer announced that their COVID-19 vaccine was 90% effective, precipitating a major market rally as a result. Any market shifts that came a result of Biden’s victory were amplified by the positive market response to this pharmaceutical development.

However, it’s still worth considering what a Biden presidency means for British and American investors. COVID-19 won’t occupy the entirety of the Biden administration’s tenure, and the huge policy divergence between Joe Biden and Donald Trump means that we’ll undoubtedly see the financial markets reacting differently in the years ahead.

So, with this in mind, there are certain aspects investors could consider following Biden’s election victory. Although it’s still too early to make any concrete forecasts, especially with control of the Senate hanging on Georgia’s run-off elections, there are still important observations that can be made.

Although the upcoming Georgia run-off senate race is being hotly debated within the US media, the reality is that Republicans will almost certainly retain control of the senate throughout the Biden Presidency.

For investors, this may represent great news. Analysis of all Presidential scenarios since 1945 reveals that a Democrat president governing with a split congress generated, on average, the best average annual returns for the US stock market – nearly 14% in dollar terms – according to UK firm Quilter Cheviot.

The reasoning behind this comes down to constraining what the President can accomplish. A split congress, as Barack Obama discovered in his final two years in office, can mean that much of what a President attempts to deliver is quickly impeded by filibusters and congressional obfuscation. This is especially the case in the senate.

Although the upcoming Georgia run-off senate race is being hotly debated within the US media, the reality is that Republicans will almost certainly retain control of the senate throughout the Biden Presidency.

But what could a split Congress mean for Biden? Ultimately, it might constrain his ability to introduce larger economic support spending, health or tax reforms, and climate-related legislation. Stocks and assets that performed well during the last four years would, in this scenario, largely continue to perform well. However, if Biden manages to clinch control of the Senate, how would his ambitious plans impact the markets?

Trump’s most impactful economic policy, by far, was the cutting of the US corporate tax rate from 35% to 21%. Investors, traders, and CEOs all benefited massively from this, which is part of the reason why the Dow Jones has been making steady gains during Trump’s presidency.

Biden’s tax plan, increasing the corporate tax rate to 28%, would be seen as a huge blow to many US businesses. Although still 7% shy of the tax rate in place before Trump took office, many of the companies listed on the benchmark S&P 500 index could see their margins shrink if such tax reform was implemented.

The biggest winners from the Trump Tax cut, including AT&T, Hilton Worldwide, General Motors and Walgreens Boots Alliance, would all be hit hard from this shift in tax policy. Whether Biden is successful in enacting his envisioned tax reform, however, is still yet to be decided.

Technology on the horizon

The performance of technology stocks this year has been keenly observed by investors and traders. We’ve seen Apple become America’s first $2 trillion-dollar company and the working-from-home revolution facilitate a surge in remote-working shares, including Slack, Zoom, and Amazon.

A tech sell-off has already begun in reaction to Pfizer’s aforementioned vaccine development, but would this accelerate upon Biden moving into the White House? Democrats like Elizabeth Warren have vowed to do everything in their power to break up Amazon, Google and Facebook via anti-trust regulations; a move that could see millions of dollars of value wiped in an instant for these companies.

Depending on whether Biden shares the ambition of his Democrat colleagues in this regard could facilitate a huge shock for investors in US technology. Those who own stock in, for example, Facebook may have to decide between keeping their shares in the core Facebook product or, alternatively, Instagram if a break-up of the company goes ahead. Although action of this kind is definitely more likely to occur under a Biden presidency, we will have to wait and see whether this transpires.

In general, then, investors should be closely following US political developments if they own shares in any American-based companies or major stock indices such as the S&P 500. If Joe Biden is successful in the Georgia senate run-off elections, then it’s possible that many of his more ambition plans may be attempted, leading to huge ramifications across numerous asset classes.

The immediate reaction would likely be a large initial surge in US stocks in anticipation of a larger US stimulus package.  Alternatively, a Democrat President and Republican Senate will likely facilitate much more political compromise in American politics, which itself guarantees a certain level of economic certainty that, subsequently, will allow financial markets to grow and grow.

So, in many ways, with the large amount of fiscal stimulus, QE, low Fed interest rates, and willingness for the US to take on debt, I believe the US stock market should ultimately benefit either way in the medium to longer term. We are in an age where fiscal conservatism is dying and that should boost US stocks over the next Presidential term.

High Risk Investment Warning: CFDs are complex instruments and come with a high risk of losing money rapidly due to leverage. 75% of retail investor accounts lose money when trading CFDs with this provider. You should consider whether you understand how CFDs work and whether you can afford to take the high risk of losing your money. For more information please refer to HYCM’s Risk Disclosure.