What Can Threaten Tesla’s Reign in 2021?

Tesla’s real competition will be the firms it thought it was replacing. 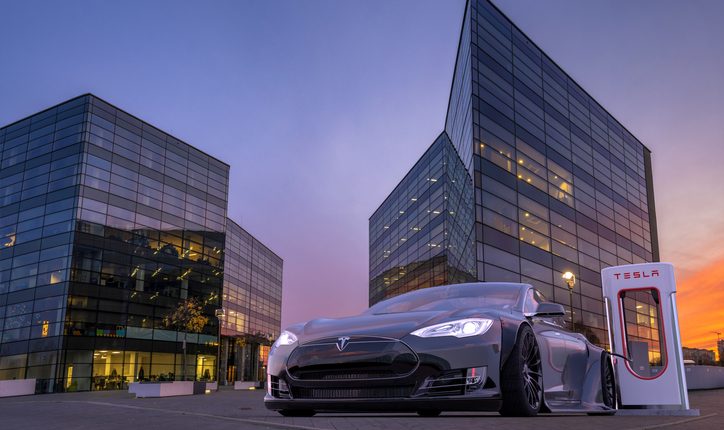 Big news in early January was a Porsche Taycan knocking off nearly an hour from Tesla’s record for driving an Electric Vehicle (EV) across the USA in just 44 hours and 26 minutes. Most people think Tesla will soon be back on top, perhaps by using a new 600-mile range, fast-charging battery (which could be a possible option costing a paltry $180,000 when you spec your new car); or, it might be some new producer that takes the Cannonball Trophy.

A few weeks ago I wrote in my market commentary, The Morning Porridge, about the 120-160 new Electric Vehicle companies feeding the frenzy in the EV sector. (No one is quite sure how many are genuine…) All of them are making grand promises about why their tech is better, how they are going to revolutionise the sector, and presenting vaguely sketched plans to achieve profitability by selling 5 million units by 2025.

As we transition from conventional Internal Combustion Engine (ICE), EV demand might hit 12-15 million electric vehicles by 2025 and maybe 25 million by 2030. Yet, the current market valuation of these 120+ speculative EV startups is around $300 billion – which is an awful lot of money someone is going to lose when it becomes clear that, no matter how marvellous and inventive they are, there just won’t be a big enough market for them to deliver into.

Many of these new firms contain the kernel of a brilliant idea. They could revolutionise all kinds of things we didn’t realise we needed until they invented them. Supporters will say: “These aren’t auto companies, they are creating new energy/autonomous driving/tech opportunities….”.  The reality, however, is that the whole startup EV sector looks like a massive tech-struck speculative bubble.

But the EV is here to stay.

Tesla deserves the credit for starting the revolution and has reaped the rewards. Its stock currently trades somewhere north of unbelievable and is likely to go even higher (all the way to absolutely ridiculous). Some analysts see it going even higher, as it expands its footprint to make and sell cars in China. There will soon be a Berlin factory to supply Europe. It may also finally deliver on promises to expand production from 499,000 vehicles in 2020 towards maybe 5 million in a few years. (Few being a random number between 3 and 30.)

There is plenty of evidence to suggest that keeping a standard ICE engine and planting a tree every time you fill the tank is a better route to achieving carbon neutrality than buying a Tesla.

Does it matter how many cars Tesla sells? The reality is that the company doesn’t make a brass cent of profit from selling cars – its sparse profits have all come from the sale of regulatory credits. That has not deterred all these new entrants to the market who intend to compete with it. They are riding a tidal wave of new technologies and innovations aimed at overcoming the critical issues with EV: the high costs of batteries, limited range, lack of charging infrastructure, and the time it takes to recharge.

Battery makers are some of the most inventive people on earth, filing more patents than just about any other tech sector. New, bigger, faster batteries will be one way to go – except that demand for lithium is going through the roof, casting doubt on the future of EVs if the batteries become prohibitively expensive. The sector is founded on the belief that widespread adoption will cause the cost of batteries to fall – ignoring the reality that lithium is a very scarce resource.

To solve the range and cost conundrum, a Chinese EV maker has had a great idea: sell cars without batteries and switch in a new fully charged unit at any conventional petrol station. There are new lithium-ion phosphate batteries that work and charge faster at high temperatures. Neither of these will solve the cost problem. Fortunately, there are carbon-ion batteries on the horizon that will charge fast, are solid-state with limitless life, and are cleantech, but they aren’t energy-dense (i.e. range) yet.

There are other, deeper issues to resolve. There are the social implications of EVs, (the “S” in ESG), including mining (child labour, exploitation of poor countries, and environmental degradation), the longevity of batteries (they just don’t last long and most won’t go more than 100,000 miles), and the difficulties and pollution problems connected to recycling them.

There are also doubts that EVs are the right way to address the “E” (Environment) in ESG. Potential customers looking to go green may conclude that more efficient hydrocarbon ICE engines, or hydrogen fuel-cell cars (in the future) are cheaper and better for the planet in the long run. There is plenty of evidence to suggest that keeping a standard ICE engine and planting a tree every time you fill the tank is a better route to achieving carbon neutrality than buying a Tesla.

However, the real winners in the EV space could very well be very automakers that Tesla set out to replace – the existing big firms. Tesla was founded in 2003 and it took years for the big firms to perceive and recognise the scale of the threat. (Musk bought his way into the firm in 2004 with a $6.5 million series A investment – a trade that’s made him the richest man on the planet… that’s genius.)

All the big automakers are now wide awake to the EV threat. The A-Z of makers, from Alfa Romeo to Volvo are all planning EV launches. These firms have a pedigree going back a century or more. They have the weight and heft, plus the networks and infrastructure to design, built, market and sale new EVs… if only they could get it right.

Tesla’s great success comes from its fundamental advantage – it was never a conventional carmaker. It wasn’t burdened by the baggage of years of building ICE engines, conventional drive trains, engineers opining on how many cylinders it will require to make it go faster, and cost accountants who understood the input and output costs of their industry.

All the big automakers are now wide awake to the EV threat. The A-Z of makers, from Alfa Romeo to Volvo are all planning EV launches.

Tesla started with a clean sheet, reimagined the car and electric engine, the potential of software and upgrades, and designed everything else around that. Everything that’s followed has been incredible. Some of it has debatable provenance – myths created around the brand including the new religion that Musk is a tech messiah and inventive genius. It’s simple – a car, an electric engine and a battery.

Tesla rode its own wave as demand was stoked by the environmental proposition, conveniently ignoring the pollution and recycling issues, and subsidy from the government. The image has been polished by the narrative that it’s not a car company – instead, it’s about energy, data, batteries, autonomous driving, etc. The final stroke of genius was to market it by closing the marketing department and nurturing fans prepared to big up Tesla on social media and day-trading investment sites.

In contrast, the big auto firms have moved at glacial speed; tripping over their internal ICE bureaucracy and making some terrible mistakes. They are still designing EVs as if they are conventional cars. After being caught falsifying emissions, VW has staked its future on EVs, but their ID.3 offering is lacklustre, dull and can’t yet be updated over the net. The Porsche Taycan struggles in performance terms versus the cheaper and older Tesla.

One of the funniest things I’ve read recently is “Renaulution” – the plans of Luca de Meo, CEO of French carmaker Renault, to turn around the producer of perhaps the world’s least desirable cars by becoming Europe’s leader in EVs. He plans to move Renault from “a car company working with tech to a tech company working with cars”.  It’s announced grand but probably empty statements full of corporate verbiage such as “the brand will embody modernity, and innovation within and beyond the automotive industry in energy, tech and mobility services…” I didn’t bother to read further because Musk has already said it. Better, clearer and his firm has delivered.

But and here is the nub… VW got it wrong with its first EV. I bet the coming ID.4 will be much, much better. The firm has learnt that the EV paradigm shift pioneered by Tesla is about the cloud, software and apps just as much as getting the tech right. BMW’s new iX can only be described as “fugly”, but it’s got range, it’s lightweight, it’s fast and has cachet because it’s a BMW.

In the next few years, most of the old auto firms will have played catch-up and will be offering cars the public wants to buy. They will offer lots of options, have the service and networks to follow up, and they will also be able to offer alternatives like hybrids which may be ultimately better options. They will have learnt how to adapt – meaning if hydrogen ever becomes a realistic option, they can move fast. And in the meantime, they will be eating Tesla’s lunch. They will take EVs up the evolutionary road to the same stage ICE cars are… commodities.

For full disclosure: because of the range, recycling and battery life issues, I’m thinking about buying a plug-in hybrid Land Rover to replace our ageing Fiat Roller-Skate (which in 10 years has done 6000 miles of to-the-shops and back.)