Why Lithium is Already the Commodity of the Year

The massive wealth of the 20th century was all about the oil boom, but the 21st century is going to be about lithium as electric vehicles move in to replace traditional vehicles. The global economic implications are vast and far-reaching, and for new small-cap miners who have plunged into this game hard and fast, those […] 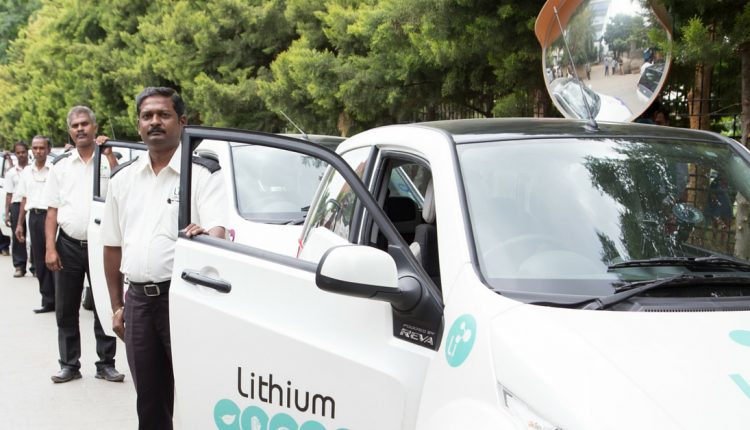 The massive wealth of the 20th century was all about the oil boom, but the 21st century is going to be about lithium as electric vehicles move in to replace traditional vehicles.

Bloomberg predicts that EVs, “could be as disruptive to the oil market as the OPEC market-share war that triggered the price crash of 2014.”

But Bloomberg’s prediction that EVs could wipe, “hundreds of billions of dollars off the value from fossil fuel producers in the next decade,” is a profitable prophecy for Bearing Resources.

Bearing Resources Ltd. (BRZ.V) (BRGRF) is poised to be one of the first out of the gate as the growth of EVs promises to be a major market disruptor.

We may have already seen US gasoline demand peak, and future demand may be in a state of permanent decline, in large part because electric vehicles are becoming cheaper and hitting the mainstream.

It’s not an energy revolution that’s just slipping up behind the oil supermajors in a surprise attack. They have seen it coming, and its momentum has been difficult to ignore. BP p.l.c. (NYSE: BP) has said that EVs could displace up to 5 million barrels of oil demand over the next 20 years.

Shell is also stepping in with plans to use its European petrol station infrastructure to service EVs and the first of these will come into being by the end of this year.

Now that the EV revolution is assured, with Tesla’s (NASDAQ: TSLA) Model 3 sedan defying the traditional high price of EVs and hitting the mainstream with a resounding boom, commercial vehicles will be next. Tesla has already announced it’s making a Tesla-semi, which CEO Elon Musk says, “will deliver a substantial reduction in the cost of cargo transport,”-yet another major economic implication of the energy revolution.

This is the definitive picture, and there’s no stopping it at this point. It means that lithium supply is everything, and there has never been a better time to take a hard look at the small-cap miner who is set to be one of the first to make it across the new supply finish line.

Sourcing batteries is what this energy revolution is all about; and sourcing batteries means sourcing lithium. And the rewards for the handful of small-cap miners who develop and get new lithium to market first will be big.

Chile: The Back Door of the EV Boom

Chile is the world’s biggest lithium venue, and this is exactly where Bearing Resources Ltd. (BRZ.V) (BRGRF) has acquired a world-class resource that gives it the second-most advanced lithium brine project in the world.

The biggest share of the world’s lithium comes from Chile, whose Atacama area produces 40% of our global supply right now. Chile has enough lithium to supply the world for decades, according to Financial Times. And while the country has been painfully slow in exploiting its lithium, that’s about to change: There is a new sense of urgency with the lithium boom in full force, and the Chilean government is now viewing this precious commodity as its new gold.

Chilean President Michelle Bachelet has even ordered state-run Codelco to move ahead with lithium projects in Maricunga and Pedermales to promote new production. She also just signed a bill into law to inject US$975 million into the company to help it along.

The world’s biggest players have stood up and taken notice. US mining giant Albermarle Corporation (NYSE:ABL)-the company with the only producing lithium mine in the US-is also banking big on Chile, striking a deal to increase its lithium production from an existing facility there. On 4 January, the government approved its expansion plans.

Chinese and Korean investors are in advanced talks with the Chilean government to open up a $2-billion lithium battery mega-plant that would feed on the country’s lithium riches. This will put it into direct competition with Tesla’s Nevada battery gigafactory, which was just turned on in January, adding to the intensifying euphoria surrounding lithium.

All of this puts Bearing Resources-which is a front-runner to advance to new production first with the highest grades of low-cost lithium-is a prime position.

Maricunga is located in the 2nd largest lithium brine project in Chile with exceptional grades. This play is second only to the Salar de Atacama, which accounts for 100% of Chile’s lithium production, and about 40% of global production. Not only does it have world-class resources, with higher grades of lithium than almost anything else out there, but it also has significant potential for resource growth. The project covers 4,463 hectares-some of which fall under an earlier mining code that allows for immediate exploitation. Li3 has already put over $30 million into the project, and a major exploration and development project is already underway to de-risk. Another $22 million will be spent ahead of the Definitive Feasibility Study next year already.

The near-term catalysts are more exciting than anything else on the new lithium scene right now. They include exploration results from 16 wells, pump tests from two production wells and an updated resource estimate, as well as construction and operation of evaporation ponds and a pilot plant.

Bearing expects its resource to expand by 2 to 3 times after the current drilling program is finished; and so far so good-they’ve just released drilling results. The highlights are impressive and include results from the S6 hole drilled on the San Francisco tenement, which averaged 1,368 mg/l lithium over 186 meters, with a peak assay of 3,375 mg/l lithium. This is the highest-grade lithium brine intersection to date, and we’re still waiting for more drill results for three other holes.

Results like this is exactly why Chilean lithium giant SQM (NYSE: SQM) is right next door and fully committed to development.

In Chile, if you want to get in on lithium before anyone else, look for the small-cap that’s positioned itself right next to the biggest player on the scene.

Chile’s lithium is of a significantly higher grade, 2-4 times higher than Argentina’s, another ‘Lithium Triangle’ sweet spot. So far, Bearing Resources has seen some of its results come back at over 2000 PPM, with other holes average up to 1500 PPM.

Bearing Resources is sitting on prime lithium territory that got started in 2009 during the original lithium run. With US$30 million already into it, it is poised to be one of the first across the new supply finish line.

The first phase of Bearing’s project will cost US$8 million and see the drilling of 18 wells. It’s already funded and paid for. The first phase is an 18-well project that is expected to double or triple the resource. This would put the project on the same timeline as Lithium Americas Corp. (TSE:LAC).

The next three months will see flow results and pumping tests. While Bearing isn’t pinging on the investor radar right now, getting in on the ground floor of this will be more expensive around April or May, when the company announces an update on its resources, which they expect to double or triple. As one of the few projects that’s already got tens of millions in investment into it and work done, the resource update will be a very big deal.

The resource is already proved-up, so once the results come in in April/May, it’s just about de-risking and moving into phase two in the third quarter of this year.

And shareholders will likely be quite keen: The deal Bearing made with Li3 for this world-class lithium project has a free carry-all, which means no dilution. They also have enough capital in the bank to complete the transaction and to fund-so trip back to the market.

When the results come out in April/May, Bearing will be looking for ways to expand its stake in the project.

It’s also worth taking a good look at Bearing’s world-class partner and partner potential. Posco (NYSE: PKX), one of the world’s largest steel companies, invested US$18 million in the project, and its bringing proprietary lithium technology with it. This is a US$70-billion/year company with a brilliant balance sheet for building up this lithium project. Posco’s lithium tech has already successfully tested at an 88% recovery rate in under 8 hours.  Bearing says the current resource on the project is 600,000 tonnes, measured and indicated.

There’s also a clear pathway to other major partners, including Codelco, which recently announced with the government that it’s going to develop the Maricunga project.

The Way Forward is Truly Electric

Consider this: The lithium rush is in full force now that Tesla has turned on its gigafactory, and that’s only the beginning. At least five gigafactories are planned for Europe, with Tesla eyeing one of them to make batteries and build cars.

German BMZ has launched the first phase of its German battery factory, and LG Chem is planning one in Poland, which is slated to open next year. Samsung also hopes to start making batteries in Hungary beginning in 2018.

This is set to be a bull run based on one of the most voracious commodity appetites we’ve seen in decades, and the new barons will be the first lithium deal-makers-in other words, the first to bring new supply into production.

Supply simply cannot keep up with demand, and lithium prices tripled even before the battery gigafactories got off the ground.

Today’s global lithium-ion cell production is only enough to supply around 900,000 to 1 million electric vehicles-or, in other words, a meagre 1% of the demand considering 100 million light EV sales, according to Evercore ISI analyst George Galliers.

PriceWaterhouseCooper (PwC) also agrees that “supply will continue to trail until new projects come online in the next five years.”

Bearing is right on the front line, in the best place to develop new lithium supplies right now, and it’s closer to the finish line than most, which means its closer to breaking into the 21st Century revolution that will redefine our wealth.