30 Years Since Black Monday: How Does It Compare To Other Crashes?

19th October marks the 30th anniversary of Black Monday, when in October 1987 stock markets around the world experienced a flash crash. The FTSE 100 fell 11% on the day, and then fell a further 12% the next day, wiping out more than a fifth of the value of the UK stock market in just […] 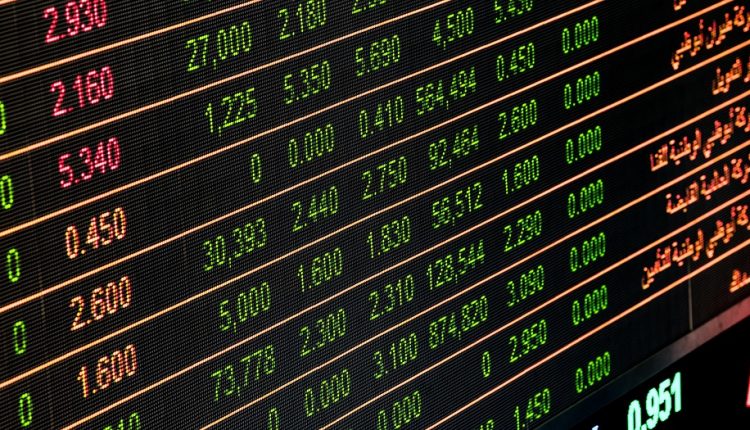 19th October marks the 30th anniversary of Black Monday, when in October 1987 stock markets around the world experienced a flash crash. The FTSE 100 fell 11% on the day, and then fell a further 12% the next day, wiping out more than a fifth of the value of the UK stock market in just two trading sessions.

As terrifying as these sharp falls were, hindsight tells us that for investors who didn’t panic, even a badly timed investment made money in the long run.

Laith Khalaf, Senior Analyst, Hargreaves Lansdown: “Stock market crashes are a bit like the Spanish Inquisition- no-one expects them. The 1987 crash is renowned for the speed and severity of the market decline, and undoubtedly when markets are plunging so sharply, it’s hard to keep a cool head.

“Hindsight clearly shows that the best strategy in these scenarios is to sit tight and not engage in panic selling. Time has a tremendous healing power when it comes to the stock market, and price falls are typically a buying opportunity. The stock market is an unusual trading venue, in that buyers tend to stay away when there’s a sale on.

“The Footsie has recently reached a new record high, which prompts the question of whether it’s heading for a fall. There are always reasons to worry about the stock market and now is no exception. The Chinese credit bubble is front and centre of concern, along with increasing global protectionism, and the disturbing prospect of World War Three being started on Twitter.

“However there are also reasons to be positive, with the global economy moving up a gear, borrowing costs remaining low, and stocks facing little competition from bonds and cash when it comes to offering a decent return.

“The market will of course take a tumble at some point, and it’s impossible to predict when. This makes being bearish an easy game, because you only have to wait so long before you are eventually proved right. The big question though, is how much you have lost out on in the meantime by sitting on your hands.

“It’s important to bear in mind that investing isn’t a one-time deal, savers typically invest at different times throughout their lives, and at different market levels, and sometimes they will be luckier with their timing than at others. To this end, a monthly savings plan takes the sting out of any market falls by buying shares at lower prices when the inevitable happens.

“The golden rule, of course, is to make sure you are investing money for the long term. In the short term the stock market is a capricious beast and can move sharply in either direction, but in the long run, it’s surprisingly consistent.”

The first column shows what you would have got by investing £10,000 on the eve of the crash, and pulling your money out at the bottom of the market. The remaining columns show what would have happened to your investment if you had held on to it. These numbers should be viewed as examples of what stock market returns have been if your timing is really pretty stinky, and you only happen to invest £10k once in your entire life, on the eve of a dramatic downdraft in the market.

Stock prices recovered pretty promptly after the 1987 crash, in contrast to the bursting of the tech bubble in 1999, which was compounded by the Enron scandal and the World Trade Centre attack, leading to a deep and prolonged bear market lasting until 2003. £10k invested in the stock market in 1999 would be worth £23,210 today, an annualised return of just over 5%.

Looking at these figures, it’s hard to dodge the conclusion that this was the worst of all three periods for stock market investors. It also contributed to the already declining fortunes of defined benefit schemes in the UK, and did huge reputational damage to insurance companies as the dreaded MVR (Market Value Reduction) became common parlance amongst hitherto happy With Profits policyholders.

The value of rolling up dividends shines through in the numbers below. Since the peak of the market in June 2007, £10,000 would only have grown to £11,890 based on stock price movements alone. But once dividends are counted and reinvested, that rises to £17,230, not a bad result given this money was invested at the peak of the market just before the global financial crisis took hold. 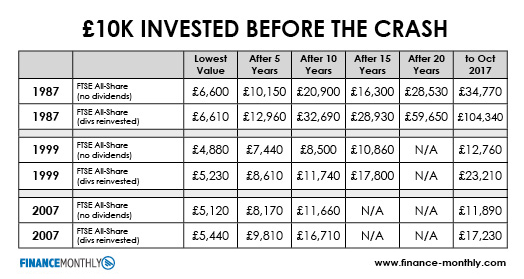 Is the Footsie about to crash?

The FTSE 100 reaching a new record high recently has of course prompted questions about whether it’s heading for a fall. However the level of the Footsie is not a measure of the value in UK stocks, seeing as it doesn’t take account of the level of earnings of companies in the index.

The headline historic P/E is elevated compared to its historic average, though still well short of the level seen in 1999.

The Cyclically Adjusted P/E Ratio, a valuation method championed by Nobel prize-winning economist Robert Shiller, takes a longer term view of earnings by looking over the last 10 year, which smooths out volatility in the one year P/E number.

On the cyclically adjusted measure, the UK stock market is trading below its historical average, and well below levels seen in both 1987 and 1999.

So which of these two measures should we believe? Well, we assign more weight to the Cyclically Adjusted P/E because it takes a longer term, more rounded view of stock market valuation. But if we simply take both measures into account in combination, together they suggest the market is somewhere in the middle of its historic range.

When thinking about the valuation of the stock market, it’s also worthwhile considering the valuation of alternative assets. The 10-year gilt is currently yielding 1.3%, and cash is yielding next to nothing with base rate at 0.25%. This contrasts sharply with 1987 when base rate was 9.9% and the 10-year gilt was yielding around 10%. So if you think the UK stock market’s expensive right now, then you have to take a really dim view of the value provided by bonds and cash.