Lehman’s Lingering Legacy: Why Financial Services M&A Has Not Recovered from the Crisis

A decade on from the great financial crisis and the fall of Lehman Brothers and Europe’s financial services is the only sector not to have returned to pre-crash levels. Below Finance Monthly hears some expert commentary from Beranger Guille, Global Editorial Analytics Director at Mergermarket, an Acuris Group company, on the current state of European […]

A decade on from the great financial crisis and the fall of Lehman Brothers and Europe’s financial services is the only sector not to have returned to pre-crash levels. Below Finance Monthly hears some expert commentary from Beranger Guille, Global Editorial Analytics Director at Mergermarket, an Acuris Group company, on the current state of European M&A in the Financial services sector.

Despite an appetite for large-scale banking mergers and an eagerness to create pan-European banks capable of challenging rivals across the Atlantic, Europe still operates under strict rules that have so far prevented such merger ideas from materialising.

Between 2006 – 2008, Europe saw a total €607.9bn change hands across 1,592 deals. Since 2016 to date, activity remains still nowhere near these pre-crisis levels, with a mere €221.1bn traded over 1,251 deals and a spectacular absence of mega-deals that were once a prominent fixture in the build up to last financial crisis. 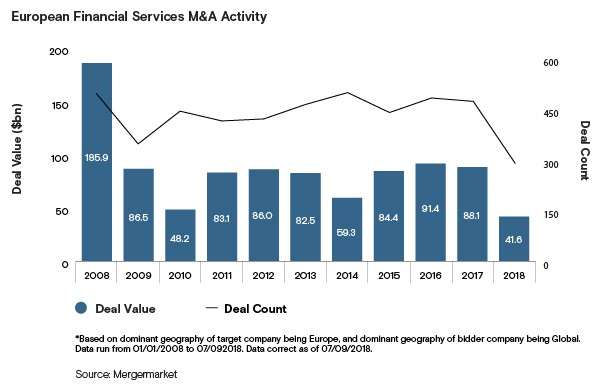 A decade on from the crash, regulators continue to introduce new rules on top of what is already a very comprehensive rulebook. Basel III and Solvency II: the first ever set of rules on liquidity, placed a robust set of capital requirements on banks and insurers, with additional process still not complete. The capital conversation buffer, which ensures banks build up capital reserves to weather losses incurred during downturns, will take effect on 1 January 2019. In 2013, The European Market Infrastructure Regulation (EMIR) drove the centralised clearing of derivatives and promoted robust reporting requirements to trade repositories. While most recently, the Markets in Financial Instruments Directive (MiFID II) and Central Securities Depositories Regulation (CSDR) has pushed more transactions to occur on exchanges to improve transparency and the overall efficiency and safety of securities settlement.

In the build up to the crash, Italian lender Unicredit conducted a string of mergers between 1998 – 2006, while Royal Bank of Scotland spent €71.1bn acquiring Dutch lender ABN Amro on the eve of disaster. Both left shareholders and taxpayers alike reeling from heavy losses.

Today, mega-mergers are once more mooted with cross-border deal discussions between Unicredit and Société Générale reportedly taking place. However, “there is nothing on the table,” according to France’s Minster of the Economy and Finance, Bruno Le Maire.

There is also talk of potential national mergers afoot. In the UK, Barclays chairman John McFarlane is eager to do a deal with Standard Chartered, while German lenders Deutsche Bank and mull a merger of their own.

But, despite an apparent eagerness to get deals done, there is a lot of cold water that investors and analysts are only too quick to pour on such tie-ups.

There is a lack of strategic rationale behind a Barclays-Standard Chartered deal, with two banks having little to no geographical overlap, with the former boasting strong ties in the UK and US and the latter firmly focused on emerging markets in the Asia and Africa. Meanwhile, discussions between Deutsche Bank and Commerzbank certainly offer a stronger rationale, but it should not be forgotten that Deutsche Bank launched a €8bn rights issue – its fifth capital hike since the crash – to plug holes that continue to leak.

Given the political environment in the EU, and that there is a degree of nationalism when it comes to banks, large-scale cross-border deals look anything but likely. Two years ago, Swedish lender Nordea made an approach to acquire ABN Amro but had its offer slapped down by the Dutch government. Some bankers were even brazen enough to pitch a merger between Barclays and Santander. Cross-border European deals for the time being at least seem off the table, but domestic mergers could provide dealmakers something to chew on.

The timing of renewed merger talks is interesting, with the next cyclical downturn expected to come to bear in the next two years.

Calls for consolidation amid so much uncertainty is cause for concern, but desperate times lend themselves to management contemplating desperate measures. Weak profitability is putting pressure on banks to take action at a time when big tech, fintech and alternative lenders threaten to grab market share. And while the appeal of cross-border mergers may provide a boost to the sector’s profitability, bigger banks, history tells us, are not necessarily healthier banks.