Could 2021 top 2020’s stunning IPO success? Despite the coronavirus pandemic, over $78 billion was raised through public offerings last year. As the bulk came in towards the end of 2020, this suggests a growing appetite for IPOs. As an effective way to make money relatively quickly, it’s no surprise IPOs can be so appealing. However, this route does come with unpredictability and potential losses, which is why it’s so important to spend time learning about the stock market and the risks first — especially for beginners learning how to trade. 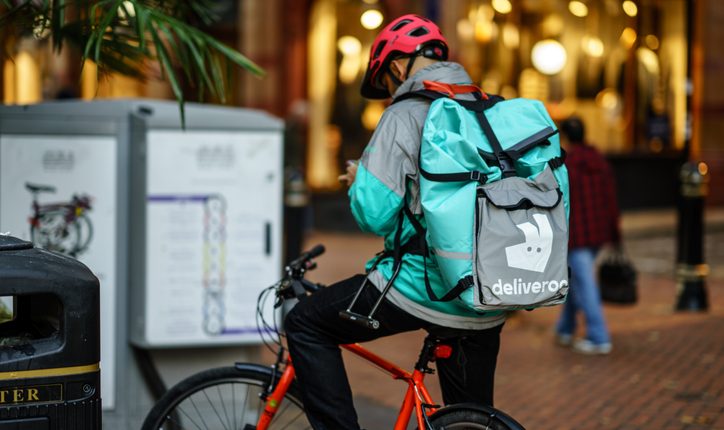 Now we’re a few months into 2021 and we’ve already seen some incredibly high-profile IPOs including Roblox, Bumble, Moonpig and Dr Martens. However, there are plenty more to come, and these are just some of this year’s most likely major offerings.

Food delivery company Deliveroo is planning to list on the London Stock Exchange where it is expected to be valued at over £5bn. However, some outlets have reported that the valuation could be as much as £7bn, in which case, early investors in Deliveroo could make around a 60,000% return on their investment once it goes public. Stockbrokers can’t take part in the IPO, but private investors can do so through a £50m UK Deliveroo customer offer. This will occur through a third party called PrimaryBid where customers can initially invest up to £1,000.

Robinhood experienced record growth during the COVID-19 pandemic, attracting millions of locked-down Americans to its gamified trading app. It has been immensely successful since its inception and was valued at $40 billion in February 2021. However, it has been embroiled in plenty of controversies over the years, most recently the GameStop saga which resulted in its CEO Vladimir Tenev testifying before Congress. Robinhood is going public on the Nasdaq exchange, according to CNBC, though both organisations declined to comment.

Some experts believe Nextdoor, the US-based social media service for neighbourhoods, has the potential to be the biggest IPO of 2021. It’s set itself apart from other platforms like Facebook and Twitter as location determines absolutely everything the app has to offer. The company reports that 1 in 4 American neighbourhoods use Nextdoor with users growing 80% month-on-month since the start of COVID-19 — the question is whether they can sustain once the pandemic ends. Nevertheless, Nextdoor has certainly established itself as a player in the social media landscape and is expecting a $4-5bn valuation.

Chime is an award-winning, American, online-only bank and is especially unique in that its users can get paid two days before their paychecks. It was the fastest-growing challenger FinTech bank of 2019 and has proven popular during the COVID-19 pandemic too. Towards the end of 2020, Chime even became EBITDA (Earnings Before Interest, Taxes, Debt and Amortization) positive, which is unusual for a startup in its early stages and is sure to make it highly sought-after once the IPO hits the market.

UK cybersecurity giant Darktrace is currently preparing to target a £4bn IPO, potentially making it one of the biggest London stock market debuts of 2021. The company has faced some challenges amidst its plans. Founding investor Mike Lynch is facing US extradition proceedings (though he is not involved in running the company), while Swiss bank UBS recently resigned as one of the lead investment banks on the IPO. However, earlier this month, Darktrace appointed former BT chief executive Sir Peter Bonfield to its board, while it has also been reported that they appointed former Capita executive Gordon Hurst as chairman to guide the company through its IPO preparations.

TransferWise rebranded as Wise in February 2021, with plans to offer a wider range of products ahead of a potential IPO bid. The British-based money transfer company was recently valued at $5bn by private investors last summer, though analysts believe it may be worth far more now. Wise has also been profitable for four consecutive years, while Sky News has reported that Goldman Sachs and Morgan Stanley will be leading the IPO of one of the UK’s most valuable tech companies ever.

According to Bloomberg, Trustpilot’s IPO values the company at as much as £1.08bn, with trading scheduled to begin on the 23rd March on the London Stock Exchange. The consumer reviews service hosted 120 million reviews and saw revenue increase to $101.9m in 2020 — it makes money by selling subscriptions to businesses, allowing them to use reviews for marketing purposes and engage with customers on the platform. Trustpilot also narrowed its pre-tax losses in 2020, from $22.6m in 2019 to $12.9m last year.

UK online pension provider PensionBee recently brought forward its plans to list on the London Stock Exchange this year and, according to the Financial Times, has offered customers an opportunity to “register their interest” in its IPO. The company has attracted over 119,000 customers since its 2014 launch and reported a 77% increase in revenue to £6.3m in 2020. Founder Romina Savova told the publication that PensionBee had nearly doubled its users and assets under management every year since its launch and believed the company could continue to grow at a “high double-digit” given the “large” UK market available.