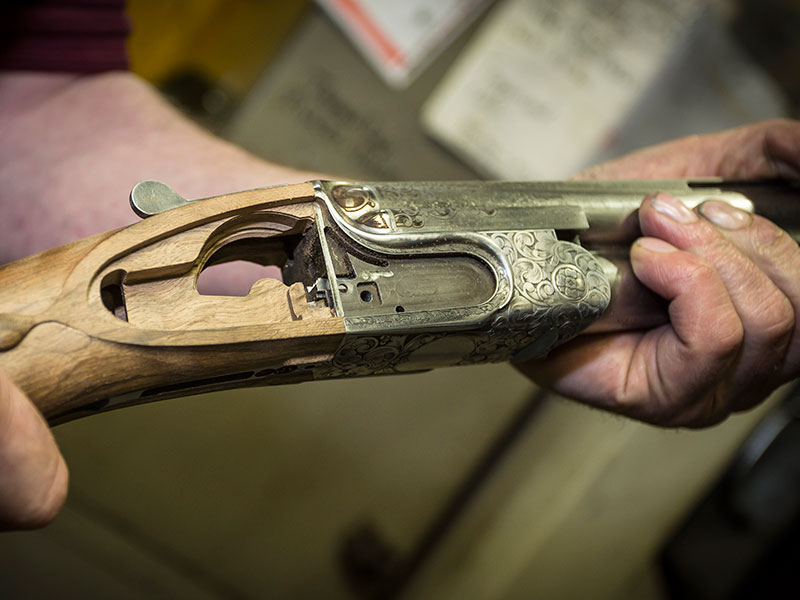 To hear more about the ins and outs of being a game changer and a leader outside of the corporate finance world, Finance Monthly reached to James Stewart – a highly skilled Engineer, who is passionate about the gun manufacturing industry. “I formed Longthorne, a new English gunmakers in 2010 with my Co-Director and wife just before we launched our first gun at The CLA Game Fair at Ragley Hall. Prior to this date, Longthorne had operated as a subsidiary of our precision engineering company which I had formed in 1998 on our return from Australia, where we had also operated a precision engineering company since 1989. I direct operations on a day-to day-basis and also have ultimate control of the design of the guns we produce and the manufacturing processes.”

What goals did you arrive with when founding Longthorne? Six years after launching your first model, do you feel that you have achieved them?

My initial goal was to produce a top quality shotgun for a reasonable cost which would enable the shooting public access to a wholly-made English gun. In recent years, a common practice within the industry has been to import parts and then assemble the shotguns in the UK; or to rebrand imported models. What I was aiming at was to incorporate innovation and modern manufacturing techniques, whilst retaining the best English aesthetics with the right weight balance.

Six years on, I believe that we have achieved our primary goals – we manufacture everything in-house and have a policy of continual improvement. If we find something which can be improved and innovated further, we set about doing it. We are always looking for improvements to form, functionality, and design. Manufacturing is sometimes more difficult than you want it to be if you want to retain the aesthetic qualities. Prismatic shapes are a lot easier to manufacture than organic shapes which generally look nicer; in essence – it is a lot easier to make something geometrically shaped. Continual investment into ‘cutting edge’ technology and machinery is expensive but enables us to do this.

Tell us more about your innovation?

Conventionally-made barrels are fabricated from two tubes soldered together, in doing so, the heat process softens and distorts the base metal resulting in barrels which are never going to be 100% straight or accurate. They also have weak points at the joints which can corrode and can lead to the barrels disassembling, if not made properly. Although we initially experimented making fabricated barrels, the method we now use involves machining both barrels from one single piece of high specification steel, resulting in stronger, lighter more accurate barrels which won’t fall apart. Additionally, they have significantly less felt recoil and muzzle flip than conventionally made barrels and they can also be proofed for steel. We believe that this is the future of barrel making. Longthorne currently has patents granted in the UK and USA, with others in process. We actually have one of our clients to thank for this – Patent Attorney Peter Finnie of Gill Jennings Avery, who is now a personal friend and an owner of 2 Longthorne guns.

What further goals are you currently working towards with the company and do you have a particular vision for the future of its products?

At the moment we manufacture ‘true side lock’ guns, while we are also working towards increasing our range of products and designs. Our long-term goal  is to improve our process capability and streamline the manufacture of the guns, to reduce delivery times and make production controllable, so we can become truly competitive in the international market.

Working with modern technology has its problems – machines have their limitations and don’t always perform the way we expect them to perform. We’re currently looking at ways to eliminate that as much as we can.

What challenges would you say you and Longthorne have encountered: and encounter on a regular basis?

We experienced initial resistance and scepticism from all walks of life, including the trade. I believe that people were scared of change and still are to a certain degree and were reluctant to accept the fact that we, as engineers, could appear from nowhere with a shotgun and with barrels manufactured from one piece of steel that actually work. Once our guns started getting out there, this diminished to a large degree. This is one of the reasons why we manufacture everything in-house – quality and stock of parts is totally controllable and we don’t have to rely on third parties to make any of our parts, it is a much safer position to be in. Traditionally, the gun trade relies on sub-contractors which is great until they get busy, retire, shut down or for whatever reason they don’t want to make parts for you.

By the nature of the product we make, it is technically challenging to produce consistent components. Working with, for example wood, can be very difficult to work with because of the patternation. Wood does its own thing to a certain degree – the more figured the wood is, the longer it takes to get the required finish and the more it is inclined to ‘move’. Although we can limit this, every piece of wood is different and reacts differently. Metal also comes with its own problems and sometimes doesn’t react the way you expect it to.

The range of side lock guns we make at the moment would be comparable to F1 racing cars – to make them lighter, faster, stronger, and more stable becomes exponentially more challenging. We have patents granted relating to our barrel technology, which involves extremely difficult manufacturing processes, which have to be carefully monitored to maintain consistent quality.

Machines can be extremely challenging and we have faced many challenges in this regard throughout our journey.

The relocation of our factory from Lancashire in the North West to Northampton in the Midlands in October 2015 was a huge challenge. Moving 14 machines, the heaviest of which was 25 tonnes, on 16 articulated Lorries was no easy feat. It began with having to dismantle part of the original location to remove the machines as some of the walls had been built around them. Sensitive machines don’t like being moved and most objected strongly to their new home.

It was also challenging to recruit a whole new team when we relocated.  Taking even a small back step and delegating is a scary thing but if the company is to flourish in its own right this needs to be done and we have to Increase the workforce with the right people and trust their judgement. Not only do they have to have the right skills, they also have to integrate well with the other staff members. It is important to us that each and every staff member fits in with the family ethos of the company and works as a part of the team to maintain the equilibrium. Sometimes the best person for the job is not the most technically qualified. We are very happy with our employees at the moment.

How are these challenges set to change, in conjunction with the advent of technologies and the potential future needs of clients?

We are currently working closely with a machine tool supplier, whose machine tools may not necessarily be the best in class. However they are cost-effective and the level of support and assistance has the potential to outshine its competitors and compensate. Reliability and support are the most important aspects of any manufacturing facility. To remain at the forefront of what we are doing, we have to continually invest in new technology as it becomes available, which automatically means that we also need to invest in our staff.

What would you say are the company’s top three priorities towards its clients? How have your sales evolved over the years?

I think when we first started selling our guns, our clients embraced the fact that we were making an English gun in England and were curious about our new barrel technology. We owe those first few sales to a handful of forward-thinking clients who willing to give us a go.  Now that we are more established in the marketplace and the innovation is proven, many of our sales are on recommendation.

Our key priorities have always been quality/innovation, delivery and affordability.

What motivates you most about your role?

Wanting to succeed and having the ability to make the decisions to make this happen motivate me the most. From a small boy, I had always been obsessed with finding out how things work and fixing them. I knew even then that I wanted to be an Engineer and was very lucky to be recognised by my high-school engineering tutor who mentored me for several years and eventually became Godfather to my daughter. It is ironic that I applied for a gunsmithing apprenticeship for a company in Liverpool on leaving school. However, at that time they were not recruiting and subsequently closed, and I became an apprentice toolmaker instead. I enjoy having the knowledge which enables me to make changes to our designs and processes.

Our clients motivate me, especially those who trusted us from the start and embraced our technology, having placed their orders when we were located in little more than an old barn. They have watched us grow and pioneered our guns and I am certain that without them, our progress would not have been possible. It feels very rewarding to be able to show them around the new factory today, when we have significantly grown and improved our facilities.

How would you evaluate your role and its impact over the last year or so?

The company has grown over the past 12 months since our move to Northampton, so my role is forever evolving. It has become less hands-on and more managerial. There is still a way to go but as our staff numbers grow, I can delegate more of my responsibility and can spend more developing the business.

What’s your golden nugget of advice for other shotgun makers?

Although tradition has a part to play, if you don’t move forward and encompass some technology -you effectively move backwards.

What lies on the horizon for the company in 2017, and what changes do you expect in the coming year?

We have an exciting new design due to be launched in 2017 with very intricate engraving and lots of metalwork. We also have outside x side due, as well as a boxlock model.

We will continue to invest and grow the business. We plan to particularly focus on export sales.

What Is the Financial Impact of Good Branding?